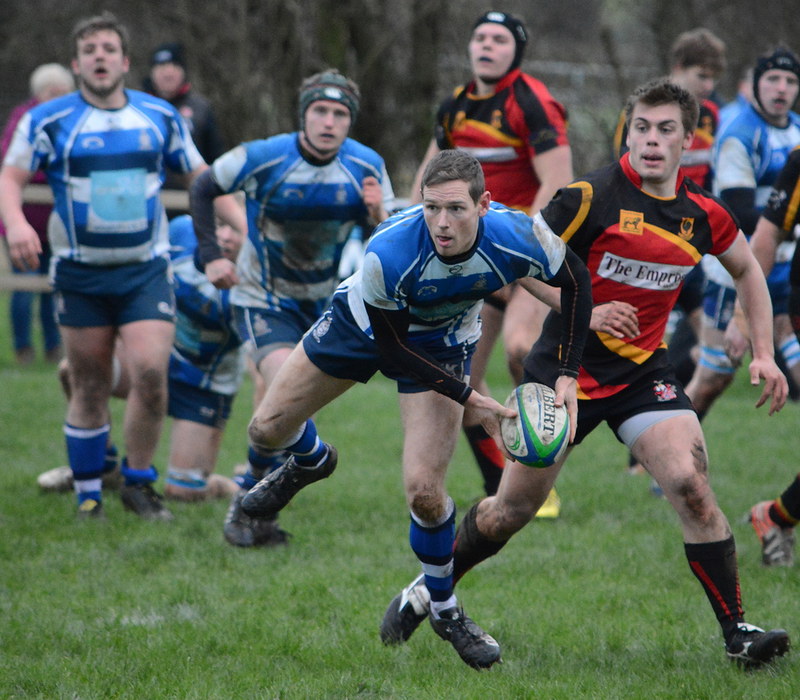 After some 7 weeks enforced lay-off, both sides were glad to be in a match again on a cold but bright and windless afternoon at Chaffer’s Field. Harrogate are quicker into the game and for 25 minutes ‘Ensians have to defend desperately. ‘Gate look stronger in the pack, but after electing for a scrum at a penalty, Jim Dyson takes one against the head and relieves the pressure on the ‘Ensians’ line. Another penalty, however, pegs the home side back again and the struggle continues. From quick line-out delivery the visitors spin the ball through the threes and the left winger has an easy run-in to the corner. The conversion attempt slews across the face of the posts and after 15 minutes Pythons are 5 points to the good. Whenever ‘Ensians make territory, the ball is spilled, Harrogate recover and kick back deep into their opponents half, putting the home side under continuous pressure. Kristian Keinhorst puts in a lovely kick to touch from a penalty and ‘Ensians gain some much-needed relief. The sun breaks through and things begin to cheer up. A bit scrappy, with Pythons still having matters their own way, regaining possession, going through the phases and making ‘Ensians chase the game. It is a question of looking after the ball for the home team and there is a feeling of rustiness about their play in these early stages. There is much spilled ball from both sides, which is keeping the score-line static, each team giving the other chances to get out of trouble. Sam Featherstone is beginning to secure ball from the line out after half an hour, but ‘Ensians are unable to spend any length of time in their opponents’ half. Harrogate are successful with a penalty and go in front by 8 to nil after half an hour. Greg Jones makes good yards and Rob Arbuckle carries it on. The home side are beginning to assert themselves and the Harrogate hooker is yellow-carded. ‘Ensians are now playing in the right part of the field, but Pythons steal a lineout. Luke Cowdell enjoys a kick -and -chase, but Pythons regain the ball and kick to clear their lines. ‘Ensians are awarded a penalty and Keinhorst converts to bring the score to 8-3 on the half hour. An ‘Ensian 5 metre scrum gives them a good opportunity and Luke Cowdell takes it with a try wide out. Keinhorst finds a nice strike and turns 5 into 7 to bring the score-line in favour of the home side at 10-8. Cowdell again prominent with strong running, Keinhorst kicking beautifully and ‘Ensians taking control. A Keinhorst kick ahead leads to an ‘Ensian try in the corner for young winger George Duncan and a half-time lead of 15-8.

Harrogate open the second half again on the attack, with their big lock making ground up the middle and ‘Ensians backpedalling. Then the home side run the ball from underneath their own posts, Cowdell goes hard, breaks tackles and then times his pass inside to Ollie Eaves for a lovely try after real end-to-end rugby.

The conversion narrowly misses, but ‘Ensians have their tails up with a lead of 20-8. Josh Howarth is now on the field from the bench following an injury absence and is soon in action. Harrogate lose their no. 10 with cramp, Dyson, Jones and Arbuckle make ground with good runs and although Pythons defend well, they are the ones now on the back foot. Rob Arbuckle incurs the displeasure of the referee with an illegal push on an opponent in a chase for a loose ball and is sent for 10 minutes rest. However, ‘Gate give away a penalty and Keinhorst makes no mistake, to take ‘Ensians further in front at 23-8. The visitors are walking to the next phase and look despondent as ‘Ensians continue to play with confidence and pace. Arbuckle is back on, Eaves is in the picture and from Keinhorst to Eaves to Cowdell, the ball is kicked dead and Pythons have a 22 drop-out. After a charge-down, a scrum has to be reset, a rarity this afternoon, when he set piece has behaved very well, with one side then the other having the stronger shove.

Another Harrogate 22 sees their left winger gather the ball on the full and it needs a good tackle from Will Cooper to halt the threat. However an infringement by the home side prompts the referee to award a penalty try to the visitors, a decision hotly contested by the home supporters. The conversion is surprisingly missed and 23-13 looks likely to be the final score. Not so; a late try for Josh Howarth, converted by Kristian Keinhorst gives ‘Ensians a win by 30 points to 13 and restores the status quo for this season’s “derby” contests between the two sides.

All in all, a pleasing return to action for ‘Ensians, with the whole squad contributing to a team effort. A good, vociferous crowd and two teams at home makes Chaffer’s Field and the clubhouse a pleasant place to be; live rugby and a hubbub of chatter afterwards epitomises the Club on a Saturday afternoon, with a win to boot! 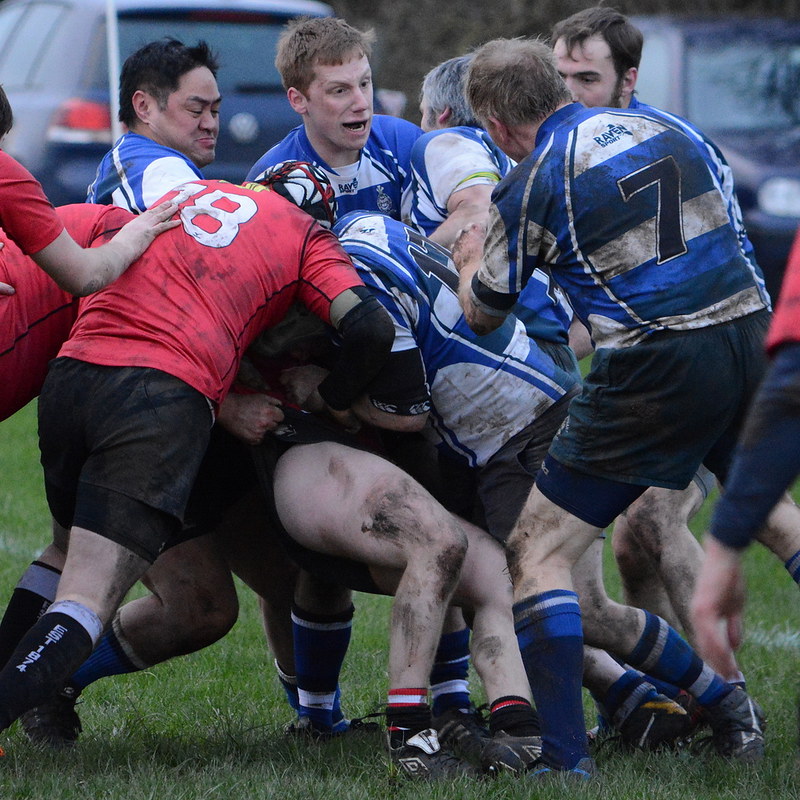 
With the 2nds only playing once in the last 6 weeks, fingers were crossed, prayers were said & dom oddy sacrificed a fatted lamb !, that the pitch inspection would give the thumbs up, & apart from a couple of hard spots it was in tip top condition for the time of year.

With both teams struggling for numbers in the front row, the scrums went uncontested. The skipton boys must of eaten a few fatted lambs themselves, as there were some big boys amongst them, so the game plan was to tackle low & move them about.

The front row was, paddy playing his second game back after breaking his leg irish dancing, alex burnet & the old badger which is paul tosney. Captain simon bret tenniswood was in the second row with the new boy – little eddy [ changed his name by deed pole ] . The ginger flash dave smith was at 7, new boy will bowie at 6 & mike Cunningham at 8. Zak stead made a return at 9 with jonny rah at ten. Dom oddy & joe tindall were in the centres with james burgess, mike burk & conner paley filling the back 3 roles. With 3 subs, it made for a happy camp.

From the kick off, dave smith took it straight back at the opposition, mike cunningham made some hard yards & the ball was spun across the backs for james budgie burgess to round his man & score with a couple of minutes on the clock, & with zak converting it was 7 – 0.

The game was being played at a good pace & paddy used all his skills he learned from playing centre to make a great break from the half way line but dropped the ball while scoring.

Skipton were a good team & came straight back, using backs & forwards to batter the ensian line until they went over in the corner to make it 7 – 5 on 14 minutes. the forwards were tackling their hearts out, with zak, dave smith & mike cunningham , especially working really hard to stop the big skipton boys. Jonny rah, dom oddy & joe tindal were looking after the skipton backs.

Paddy made another break with will bowie in support to put conner paley over to make it 12 – 5 on 17 minutes & will scored himself 5 minutes later to make it 19 – 5, with zak again converting.

The rest of the half was ensians defending like their lives depended on it , while jonny rah was getting the backs running some good lines to give skip ton their own problems.

The second half started with conner paley making a great break, but couldn’t finish it off. The skipton line out had been solid & caused problems all day, so the book of 100 sneaky line outs was dusted down & opened & the old – throw to the prop at the front was used, unfortunately , little eddy left the ball behind, but made amends on the next one to secure some good ball in the 22.

Ensians couldn’t get out of their half, & skipton went over again after several phases to make it 19 – 12. Ensians knew if they kicked to skipton, they ran it back with interest, & if they put it into touch then the driving maul from the line out was causing major problems, so the plan was to keep ball in hand & look for cracks in the defence, & with dom & joe running some good lines off jonny rah, holes appeared, with zak stead beating a couple of men to touch down in the corner on 56 minutes to make it 24 – 12.

The next try was try of the day with forwards & backs moving the ball about before oddy made a good break for daz cooley to take on, then draw the defence in for dom oddy to take the return pass & score under the posts. Zak converted to make it 31 – 12.

On 75 minutes, conner paley made another break & will bowie was in support to get his second try on his first start for the club to finish the game 38 – 12.

The score doesn’t reflect how good skipton were, with the ensians defence having to work hard all day with dave smith everywhere, but alex burnet, little eddy, paul tosney & bret all put their bodies on the line to keep skip ton boys out, with even mark elam making a couple of cracking tackles to keep the opposition from scoring.