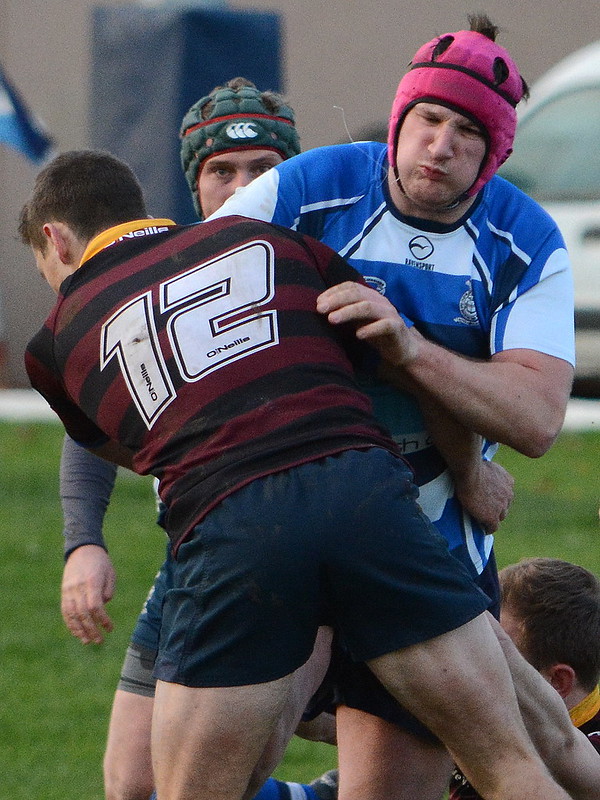 On a bitterly cold afternoon with the pitch on the soft side in places, ‘Ensians faced a side relegated last season and placed one below them in the League at 6th place. The hosts made a good start and spent the first ten minutes pressuring the Medics in their own 22. Centre Luke Cowdell came near, but then the visitors re-grouped and took play into the home 22. The hosts worked hard and towards the end of the half took the lead with a try from flanker Alex Albrecht. The 5 point advantage was never going to be enough and the strong-running students levelled the score early in the second half and then punished the hosts with a breakaway converted try late in the game.

With a gentle breeze in their favour the hosts quickly worked their way into the visitors’ 22 where half backs Rob Lofthouse and Ollie Eaves got their backs going forward to allow centre Luke Cowdell to weave his way through up to the line. From the subsequent rucks several players came close, but eventually the Medics cleared their line and used their effective off-loading game to take play into the home 22. Strong defence from the back row of Sam Featherstone, Lee O’Donnell and Ali Albrecht held out and the opposition were held up when they crossed the line on 22 minutes.

The home front row of Greg Jones, Jim Dyson and Michael Groves struggled to get tidy ball, making life difficult for their half backs, but nevertheless good support play pinned the visitors in their 22. Quick ball allowed winger Josh Howarth to make good ground on the right and flanker Ali Albrecht was on hand to take the pass and go over wide out. The conversion failed, leaving hosts with a 5 – 0 lead on 34 minutes.

In the second half the visitors stepped up their game by a notch or two through their strong running backs with able support from the forwards. The ‘Ensians’ defence worked hard with replacement prop Rob Arbuckle and lock Ali Fothergill supporting the home back row in keeping the Medics out. The home side defended desperately and gave away several penalties in quick succession which eventually allowed the visitors to drive over to level the scores at 5 – 5 on 54 minutes. There then came a setback when stand-in lock Nick Keinhorst had to go off with a shoulder injury with John Offer coming off the bench.

The ‘Ensians re-shuffled pack worked hard, but the scrum was not stable and the Medics’ back row benefitted from this by harassing the home backs. Sam Featherstone did well to hold his own in the lineouts, but the opposition lineout was solid and a plentiful supply of ball from the scrums meant that the hosts were able to get both forwards and backs running strongly with their well-timed accurate passing and slick offloading stretching the home defence time and again.

‘Ensians did make forays into opposition territory through some good driving with Rob Arbuckle, Greg Jones, Lee O’Donnell and Sam Featherstone leading the way. The trouble was that a turnover or dropped pass allowed the visitors to belt the ball down the field and the home side was back deep in its own half. Although they had a fair amount of the play, pressure on the home side continued and eventually on 71 minutes, the Medics centre broke through and evaded three tackles to go over near the posts. The conversion stretched their lead to 12 – 5.

The home side were far from finished and good picking and driving took play towards the visitors’ 22, but the promising progress came to an end with a penalty for not releasing. Pressure was again on the hosts, but a strike against the head saw scrum half Rob Lofthouse streak away from his own line to set up a promising move with support on the left, but the opposition defence managed to scramble back to spoil things as the final whistle went.

This was always going to be a close game and the offloading, powerful running and line speed in defence gave Leeds Medics the edge on the day. For their part, ‘Ensians played well in patches and created chances, but the visitors solid defence snuffed out many promising threats.