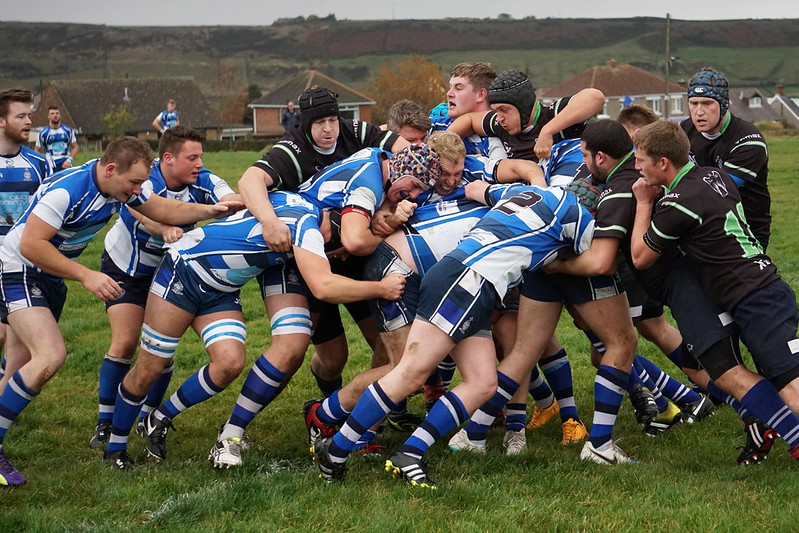 Stocksbridge had not been a happy hunting ground for Old Otliensians in previous seasons, so it was with some trepidation thst the boys in blue made the trip to Sheffield town. Played on the top of a hill, on a very exposed pitch, conditions were cold and blustery prior to kick off, players and spectators alike hoping the threatening black clouds would avoid us.

The home team kicked off, down the slope. The ball was gathered well by second row Tom Dyson and cleared to touch. Stocksbridge came on the attack but the ensians defence was strong with some good tackling in the forwards from Prop, Josh Dyson, second row Jack Smith and open side Sam Featherstone.

Ensians turned the ball over and went on the attack. Some sloppy play at the breakdown led to a Stocksbridge penalty. The kicked the ball into touch 8 meters out. They gathered the ball and set up a driving maul, utilising the slope and there sizeable forwards, forcing there way over to score a try on the 5 minute mark. The conversion was successful so the home side had a 7-0 lead.

The rest of the half belonged to the Visitors. The Ensians front row of Michael Groves, James Dyson and Josh Dyson were coping well against bigger opposition even taking ball against the head. Strong running from Blind Side, Alex Albreicht, number 8 Rob Arbuckle and second row Smith, getting the visitors over the gain line meant Half backs, Rob Lofthouse and Oli Eaves were able to move the ball well to centres Luke Freer and Chris Westland.

The home side were getting extremely frustrated with their lack of ball and were giving several penalties away at the breakdown for killing the ball. On 22 minutes a Stocksbridge player was yellow carded for swinging a punch. Putting the home side under more pressure.

The visitors were battering the home side back into their 22, the narrow pitch meant that when wingers Connor Bateman and Josh Howarth got the ball there was never much space. Both however were making good yards. Sloppy handling was costing the Ensians lads dearly with knock ons and poor passes all coming at moments when a pass to hand could have lead to a score.

When the home side had the ball, they found no route through a solid ensians defence. They tried kicking over the top. Full Back Will Cooper showed composure beyond his years and either returned the kick or ran it back, both with interest. Despite having nearly all the possession the visitors could not turn their pressure into points and the half eneded at 7-0 to the home side.

Stocksbridge started the half brightly, using their strong forwards well and with good carries from their sizeable inside center. Again the defence from ensians was immense and the ball was turned over. Ensians were on the attack again, looking threatening, pushing the home side back into their 22. Again the penalty count was creeping up but the visitors couldn't convert the pressure into points.

On 60 minutes, Ensians managed to break the dead lock. Arbuckle made a great break up field. A quick play at the breakdown meant the retreating defence was caught un aware and another great offload out of contact from Westland gave the ball to Howarth who bulldozed his way over. The conversion was missed and the score at 7-5.

Eaves came back onto the field at Inside Center and Freer was on at Scrum Half for Lofthouse after both suffered knocks. Stocksbridge made their way up field with a great break from their inside center. The Ensians defence worked back well but we're judged to have been off side. Stocksbridge opted to kick for goal and it was successful extending their lead to 10-5 on 68 minutes.

Again Ensians were pressuring hard from the restart. Turning the home side over and working the ball into the home 22. Stocksbridges penalty count was too high and they had a man in the bin on 69 minutes. Ensians were battering the Stocksbridge line. Hooker Offer was held up. The home side were defending for their lives keeping their narrow lead.

On 77 minutes the home side had another man in the bin for penalties at the breakdown. Despite this the home side managed to hold on to their lead until the final whistle went.

All credit has to go to Stocksbridge for a really spirited defence, holding onto a narrow lead for most of the game.

With bailden cancelling late, to leave the 2nds with no game the week before, tempo , roger & john churchman were desperate to make sure it was game on this saturday, & brods were true to their word. All what was needed now was a team. ! numbers grew as the week went on & ended with 18 on Saturday afternoon, with 3 viscounts putting their boots on + two new starters for ensians, - mike Cunningham & james burgess, who both had good games. It was just a case of trying to fit various players in positions that suited the team & themselves !. with smoothy boothy at a wedding & bonner still looking like Frankenstein after cutting his head 3 weeks earlier, ali fothergill & ross nicols stepped into the dark place that can be the front row, & need a pat on the back for the job they did. The sensible one of the Tetley brothers was at hooker, while his brother sam was streaking at a football match somewhere !. dean bailey was in the 2nd row with the second referee on the day matty tenniswood. paul tosney, new boy mike & jean claude van tenniswood made up the backrow. Cameron was at 9 with roger rogers [ identity withheld ] at ten. Greg knox played 12 , with George Duncan moving to outside centre as tempo had 6 wingers on the day. Connor paley moved to full back, with james burgess & Jamie kenworthy starting on the wings. Mark elam, kindly lent himself to brods [ after a slight push from tempo ] & scored the 2nd try of his career for the opposition. [ he is now banned from the club ! ] brods were more of a vets team with a smattering of younger lads, while ensians were the opposite. The game plan was to move the more portly brods pack around the field, but ensians instead, tried to go through them which played into brods hands, as they were all time served tacklers, with degrees in the dark arts of stealing the ball in the rucks & mauls without the opposition knowing, which caused matty to decide the referee needed some assistance in his job. unfortunately he didn’t agree which ended in a yellow card for mr tenniswood. When Cameron got some clean ball away, rogers rogers made a break down the blind, only to get greedyitis when a simple pass would of put james b in on his debut. After ben Tetley took a ball against the head, it ended in a scrum penalty & ali fothergill reacted quickest & tapped & was away & in space before brods could sort themselves out. branch manager rogers rogers finished it off & kicked the conversion to make it 7 – 0 on 15 minutes. Brods were using the wind to kick for position, but james burgess picked up & passed to George Duncan who made a break up the field with greg knox & now unemployed mothercare bouncer connor paley in support. [due to stress ] . Mike cunning ham took it on, but another outbreak of greedyitis ended the move, with Jamie kenworthy unmarked. The pack was working hard with brett & dean causing problems in the lineouts for brods, with strong runs from matty, ross & ali fothergill. Paul tosney, brett & mike were tackling, & turning ball over from the brods boys & from a rolling maul, ben Tetley went over to make it 12 – 0 with no conversion on 24 minutes. From the kickoff, brods used their experienced runners to try to bash their way through, with a succession of penalties having ensians defending from behind the try line, but they held out till half time to breathe a sigh of relief. Tempos half time team talk was to let the ball do the work & move the opposition round the pitch [ sounds familiar ! ]. The second half started well with Cameron giving ali foth the ball in space & with a little shimmy, turn of pace, it was bye bye Vienna as he touched down under the posts to make it 19 – 0 with matty t taking over the kicking duties. From the kickoff brods put ensians under pressure & from a quick tap penalty mark elam scored for brods to make it 19 – 5. With roger rogers having to leaf the pitch injured, alex longstaff took over at 10 & moved the ball well for connor ,greg & George to have some good runs. Ross nicols made a break & showed how its done by lining up the last defender & passing to ali f oth to have an easy run in to make it 26 – 5. From the restart, ensians came straight back at brods, & after taking them one way, the ball was spun back across the backline for ross to again hold up the last defender before giving matty t the easy run in to make it 33 – 5. Brods finished the game on the attack & again scored from a tap penalty with the stand off nearly losing his clackstones in the process !, to make it 33 – 10 on the final whistle. Things are looking up for the ensians 2nds, with 8 young lads in the team, and some good old heads, they now just need games.