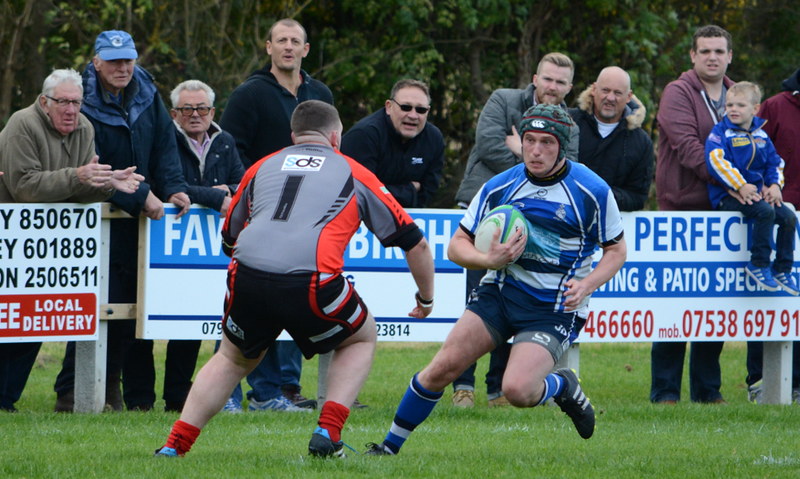 On a most pleasant autumn day with an easterly breeze and an immaculate pitch ‘Ensians played with the breeze in their derby match against Baildon. In the early stages play was fairly even but the home team were wasting chances by committing basic handling errors. However ‘Ensians took the ball against the head in a scrum after 11 minutes and 4 minutes later after pressure in the Baildon 22 Scrum half Rob Lofthouse dummied over for a try converted by Connor Bateman.

‘Ensians hooker Jim Dyson was having a great game taking another ball against the head followed by a 50 metre run through the Baildon defence .After 25 minutes Simon Hill turned over the ball in the visitors’ 22 and centre Chris Westland gave a long pass to Connor Bateman who beat three defenders to score a superb try which he duly converted to make the score 14—nil to the home team.

After a strong Baildon attack was thwarted by a fine tackle by Josh Howarth and after another scrum was taken against the head in the home 22 Will Cooper took his man and passed to Connor Bateman who ran 60 metres to score a lovely try converted by himself...Play was fairly even until the 37th minute when a kick from the home defence was turned over and after good work by Luke Cowdell the ball was passed to Olly Eaves who outpaced the defence to score another try converted by Connor Bateman to make a half time score of 28 points to nil in favour of ‘Ensians.

In the second half the substitutes were brought on but the home team remained in control. Rob Arbuckle was enjoying strong bullocking runs at one stage breaking through three tackles and Captain Sam Featherstone and Ali Campbell were working hard in the lineouts and the loose.

However Scrums became uncontested for 10 minutes when a Baildon front row player received a yellow card for a technical offence and their substitute had already been injured. This affected ‘Ensians most as they had been on top in the tight but despite this the home team scored a try after ten minutes by Luke Cowdell converted by Kristian Keinhorst.

‘Ensians were playing most attractive rugby with their hard working forwards and speedy backs and it was no surprise when after 25 minutes they again took the ball against the head in the scrum for Luke Cowdell to score his second try wide out brilliantly converted by Kristian Keinhorst making the score 42 points to nil to the home team.

The home team continued to open up play and Luke Freer took the ball 60 metres out to outpace the Baildon defence to score a brilliant try between the posts converted by Kristian Keinhorst.

Although they had been up against it for most of the game Baildon battled to the end and Nathan King scored an unconverted try for them in the last minute to make a final score of 49 points to 5 in favour of ‘Ensians.

This had been an attractive match to watch and there had been much to encourage the team for rest of the season ahead.