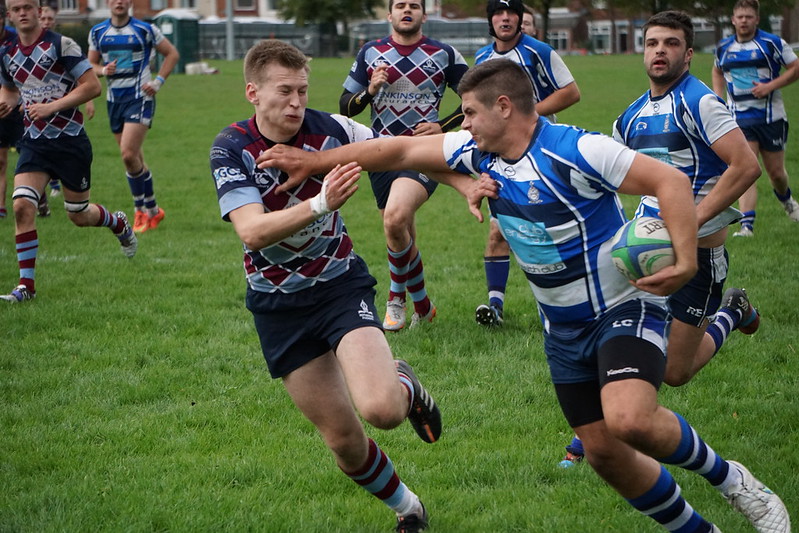 Over the years trips to Rotherham have rarely produced a happy outcome for ‘Ensians, but on this occasion, despite having several players missing due to injury and unavailability, they managed to pull off a convincing victory. For their part the South Yorkshire side put in a plucky performance out of keeping with their lowly position in the League which had the visitors on the back foot for long spells.

Things started brightly for ‘Ensians when they managed to work the ball into the home 22 in the first few minutes. Quick re-cycling allowed No. 8 Rob Arbuckle to break away up the right and centre-turned -flanker Josh Howarth was on hand to take the pass and go over wide out. The conversion by Connor Batemen gave the visitors a 7 – 0 lead on 6 minutes.

Things then started to go wrong when at the re-start ‘Ensians failed to secure the ball and allowed a Rotherham forward to gather and gallop through two tackles to put the visitors under pressure in their own 22. The hosts then showed that they had a solid lineout and a series of driving mauls put the visitors on the back foot. With prop Michael Groves deputising at hooker and the visiting pack struggling to keep the scrum steady, half backs Rob Lofthouse and Ollie Eaves had problems getting the ball away and then passing was hurried and untidy.

The home side continued to dominate, but sound tackling by centres Luke Cowdell and Chris Westland snuffed out several threatening Rotherham attacks. On 18 minutes the hosts missed a penalty and at last ‘Ensians managed to put some phases together coupled with good runs from Westland and strong support from the back row of Sam Featherstone, Rob Arbuckle and Josh Howarth. Good interplay between Westland and Featherstone took play up to the line where Ollie Eaves was on hand to take the final pass. Bateman’s conversion stretched the advantage to 14 – 0 on 29 minutes.

Far from being daunted, the hosts set about their opponents with renewed vigour and pushed play deep into the visitor’s half with their trademark driving mauls and direct running by their backs. An infringement followed and the home side converted a penalty to put them on the scoreboard at 18 – 3 on 34 minutes.

‘Ensians then clicked into gear with strong runs by fly half Eaves and centre Westland. The forwards were there in support through lively locks Keiran Walker and Tom Dyson who was playing his first game for many months. As half the home pack was battling away in the corner to keep out powerful winger George Duncan, the ball was whipped out into midfield where Luke Cowdell used his strength and pace to beat three defenders and touch down near the posts. Bateman added the extras for a 21 – 3 lead at half time.

After the break there was a setback for the visitors when a player was yellow-carded for what the referee deemed to be a dangerous tackle. Having the extra man seemed to give a boost to the home side as their forwards and backs combined well to score two tries in the next ten minutes to narrow the visitors’ lead to 21 – 13 on 50 minutes.

It then became end-to-end rugby as ‘Ensians counter-attacked through strong running by Cowdell and Westland. Fly half Eaves was having a fine game and was held up over the line before re-cycled ball allowed winger Bateman to show his pace and carve through a broken defence to score out wide on 57 minutes to move the lead to 26 – 13.

If ‘Ensians thought the game was tied up, they were wrong when a turnover allowed the hosts to break away up the left to score in the corner and narrow the lead to 26 – 20. The visitors then started putting together some good phases of rugby to show just what they were capable of as Lofthouse and Eaves started carving big holes in the opposition defence. Good offloading put Cowdell into space where he dodged round defenders to go in at the corner on 69 minutes for his second.

Three minutes later Eaves broke through and good support allowed scrum half Lofthouse to show his pace with a fine try out wide. Eaves was causing major problems for the defence as he carved through yet again, flanker Howarth was in support and he fed winger Connor Paley who raced in at the corner to round off the scoring at 41 – 20.

This game eventually ended up being a comprehensive win for ‘Ensians who, with several key players missing and others playing out of position, still managed to put periods of good rugby together. However, there will be concerns about the number of penalties conceded and spells of careless passing which led to promising moves breaking down. On the plus side were encouraging performances from youngsters Will Cooper at full back and George Duncan on the wing.

With the 2nds having to cancel for 2 weeks running, due to lack of numbers by injury or world cup watching, team manager tempo was desperate to get a team out, but with first teamers dropping like lemmings off a cliff, it made for a frustrating week. After texting or phoning anyone who had played or just walked past the rugby club, things looked good. cleckheaton cancelled & more first teamers dropped out, to cause tempo to cry uncontrollably for an hour or two. then roger whit rang with good news -moortown 3rds wanted a game & Jamie chapel & new players agent – big eddy offered a couple of viscounts & sarecens, so it was game on. Arriving at moortown tempo realised big eddy couldn’t count with only one of his stars turning up, so with 13 players , tempo decided to put his boots on ! With moortown only having 14 & both teams having a lack of props, scrums were uncontested. With a front row of the small but solid lump which is paul tosney, well travelled ben Tetley & the human drinking machine which is chris booth, things were cushti as dell boy would say. Second rows were matty tenniswood & dean bailey who both put a great shift in. The backrow was, ensians answer to jean claude van damm – brett tenniswood, big ross nicols & matt Edmonds who had a impressive first game. Tempo was at scrumhalf, but once his glasses were removed, the game became a bur, but with dave smith – the ginger flash at ten, he had target to hit. Greg knox – who caused moortown problems all day was at 12, with young joe tindal at 13, who grows with confidence every game. Jamie kenworthy, having only his second game & mark elam were covering both wings & fullback. The game started with moortown using their mature backrow to make the hard yards, but ross, bret & matt kept the yards to a minimum with solid tackling, with matt turning the ball over all day to frustrate the opposition. The ball was moved quickly to dave smith to get his backline moving, either using matty t or ross to drive up the middle or greg knox, who turned moortowns backline inside out all day, but desperate defence saved moortown time & again. moortown came back , kicking the ball down the slope & putting ensians under pressure, but with ensians returning it, looking for gaps, they were passing the ball side to side, when it really needed for someone to straighten up & just put their boot down & go for it. In the end greg knox did to make it 0 - 5 after 30 minutes. With both teams using the scrum to attack from, ensian old boy Elliot dawson, now playing for moortown, pulled one of his old leather ham strings while trying to get into 2nd gear off the back of the scrum from his no8 position. This took them to 13, then after another injury they went to 12, so ensians took one of their players off the field to even it up a bit, till half time. The 2nd half started well for ensians , putting moortown under pressure, & quick ball from tempo to boothy put him in a predicament, where the prop side of him was saying – look for the biggest group of moortown players & run into them, while everyone was screaming pass, so he passed the ball for ross nicols to make it 0 – 10, with the ginger flash using his pit boots to kick the conversions. With a couple of young first team subs helping to make the numbers up for moortown, after injuries, it lifted the home team who got a second wind, & after a good off load, their centre went over to make it 5 – 10 with no conversion. As players tired, penalties were conceded, & after a quick tap caught ensians snoozing, & another ensian old boy craig mawson ran in to make it 10 – 10 with 10 minutes left. After a bit of whinging behind the posts about a forward pass, the boys were told to pick up their dummies & rah rahs & go down & give it some, & so they did. After securing a good position in the moortown half, for a last throw of the dice, everything was set, unfortunately the ball dropped short, & tempo went blind before being hit quite hard by a few of the desperate moortown players, dislocating his shoulder, & the elbow of the moortowns 6, putting an earlier end to the game than expected. Some major positives should be taken from this game with some great rugby & teamanship from 14 bodies thrown together.