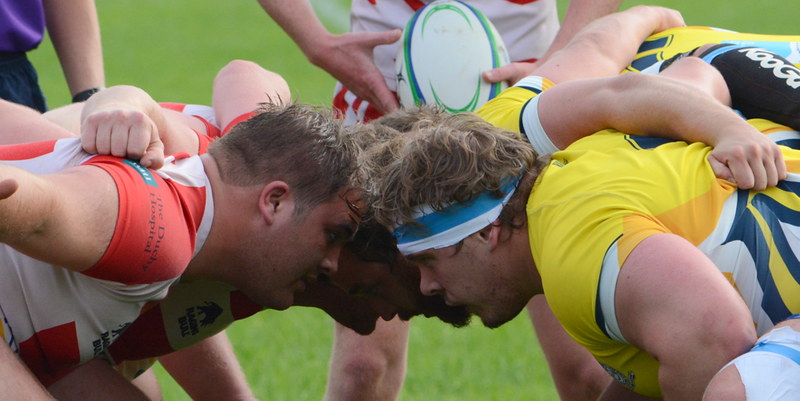 When England supporters left Twickenham late on Saturday night, they would do so with disappointment, dismay, anger and frustration; no more World Cup-ouch! RFU hierarchy would wring hands and the country in general would rue the awful facts of lost millions in revenue. Not least would be the thought of Sunday/Monday’s press.

When ‘Ensian supporters left Chaffer’s Field on Saturday afternoon, they would do so, perhaps with disappointment , but with an appreciation of an entertaining and well-fought game where, in the end, the stronger side took the spoils. There would be no “ouch”, league positions prove a point, there is everything to look forward to, the Clubhouse would make a profit and the “press” would hopefully reflect that the fortunate thing about our League 3 rugby is the anticipation of weeks to come, not the end of the world.

The hosts started the match well and were playing in the right parts of the field for good spells, but no points accrued and then, quite quickly, the visitors had posted 14 points. 25 minutes into the game, Wetherby had twice split the opponents’ defence with excellent direct running and offloading. The beginning of a goalkicking exhibition saw a touchline conversion and an easier but equally precise one turn10 points into 14 and this was to be a feature throughout, with ‘Ensians getting in on the act later.

The hosts were giving away too many penalties and not looking after the ball well enough, but Wetherby wasted another try-scoring chance and had a penalty decision reversed for talking back to the referee. A brilliant touch-find put ‘Ensians in a strong attacking position and after taking their chance well enough, a scoring pass taken “on the burst” by Nathan Rogers put 5 points on the board. Kristian Keinhorst slotted the conversion delightfully to put the Old Boys back in the match. Wetherby kicked the ball straight out from the restart, ‘Ensians were turned over in midfield, Wetherby knocked on and there seemed a reluctance on both sides to manage their game. Wetherby, however, won a penalty on the half -way line and elected to go for goal. A tremendous kick put the visitors 17-7 up at the break.

Wetherby were soon on top from the restart and after a succession of scrums and drives close to the ‘Ensians try-line, again won a penalty and converted it to maintain their place-kicking consistency and bring the scoreboard to 20-7, a potentially comfortable lead. ‘Ensians were struggling against a strong and increasingly confident Wetherby and too many infringements did little to help. However, after winning a turnover ball, the home side began to exert some pressure of their own and put together some phases; the visitors were showing signs of not enjoying the sudden reversal. This was a good session for the men in yellow (a surprise change from the familiar blue, which would not have clashed with Wetherby’s red?) and a great run by Rogers was followed by a penalty kick to the corner and from the lineout a driving maul try for Simon Hill. Again, Keinhorst improved with an immaculate strike. 20-14 and the game swung between the teams, with the visitors losing some of their composure. Connor Bateman found two excellent touch kicks to keep the home side in contention and the same player succeeded with a penalty to really put his team in the mix at 20-17.

Skipper Sam Featherstone was performing well at the lineout and his side were now recycling the ball well, but in the final quarter, they began to fall off tackles and show signs of fatigue against a top-of-the-table side running and passing with increased confidence. Lack of possession took its toll and two further converted tries to the visitors put a slant on the scoreboard that perhaps did not do justice to the ‘Ensian effort. A good start, a strong 3rd quarter, but ultimately Wetherby were undeniably the better/stronger side.

As we said earlier, Rotherham Phoenix “et seq” to look forward to.
Enjoy your rugby!