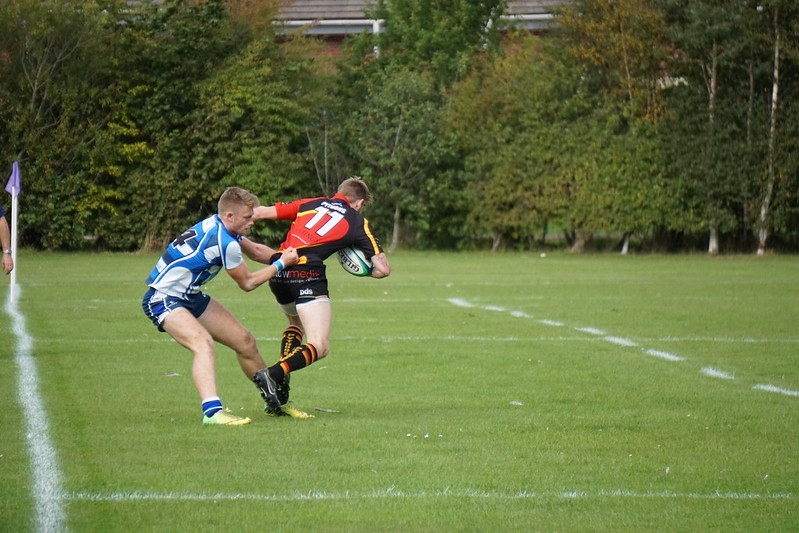 On a perfect autumn day, warm with no wind, and on a wide pitch in perfect condition, it all seemed most promising for a good game of rugby suitable for ‘Ensians expansive style of play.

‘Ensians had a few players missing and lost Luke Cowdell who “tweaked” a hamstring in the warm-up.

Despite ‘Ensians playing down the slight slope in the first half it was Pythons who made the first attack which broke down with a forward pass. They continued to press for the first 10 minutes followed by a come back by ‘Ensians after fine lineout ball was claimed by Kieran Walker..

However the next 10 minutes saw further pressure from the Pythons their promising moves being thwarted by two great tackles by Josh Howarth.

On 20 minutes debutant and ultimately ‘Ensians’ man of the match George Duncan broke through kicking ahead into the home team’s 22 but the attack was thwarted.

Pythons continued to be on top and ultimately scored a penalty goal on 32 minutes to take the lead.

This fired up the visitors who took control of the match for the rest of the half .Olly Eaves broke through but the final pass went astray, and then following a fine move involving forwards and backs combining together Josh Howarth went over for a try converted by Kristian Keinhorst.A hard run by Rob Arbuckle was stopped by a last ditch tackle as ‘Ensians came near to scoring again but the home defence held firm.

Playing down the slope Pythons spent much of the first 15 minutes in the ‘Ensians 22 but excellent defence held them out .However Pythons scored a penalty goal on 12 minutes to make the score 7 points to 6 in the visitors’ favour.

Again ‘Ensians fought back working their way up the field and after 24 minutes Kristian Keinhorst scored another penalty to make the score 10 points to 6 .

For the rest of the match the visitors “were up against it” spending most of the time in their own half .The Pythons who knew how to use the slight slope attacked continually with some good open moves and it was to the visitors credit that great defence for the most part held the home team out. The problems added up when hooker John Offer had to leave the field through injury and without a recognised hooker they lost the ball on their own put in on at least two occasions preventing any relief from the home teams’ pressure .It was not surprising when the stout defence cracked with Pythons scoring a converted try on 33 minutes and a penalty goal on 38 minutes to make a final score of Harrogate Pythons 16 points Old Otliensians 10 points.

This was a disappointing defeat but on the balance of play was a fair result.

Next week the 1st XV play league leaders Wetherby at Home with a 3p.m. kick off.