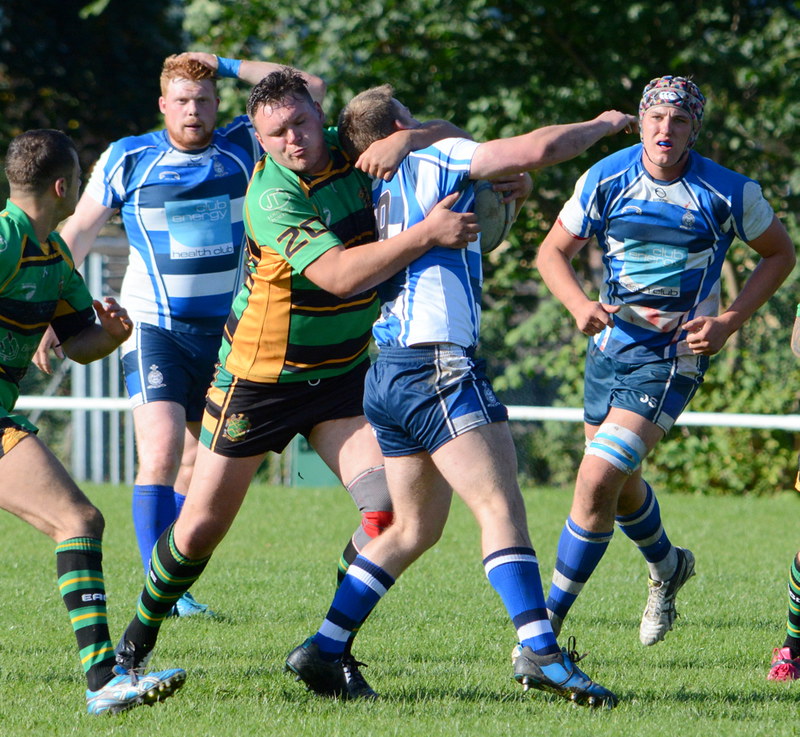 Even after a convincing win against local rivals Aireborough last week, it was with some trepidation that Old Otliensians 1st XV travelled away to Bramley Phoenix after they had done the double over the Otley side in the league the previous year.

Despite the heavy showers in the morning, the sun came out in time for kick off, which suited both sides who like to play an expansive style of Rugby. An early Bramley error gave Ensians the put in to the scrum. The visiting front row of Gregg Jones, John Offer and Simon Hill dominated there opponents and it was clear the scrum was going to be a good platform.

Scrum half Rob Lofthouse got the ball moving to Stand Off Oli Eaves who brought winger Luke Cowdell into play on a good line. Some good forward drives from Second Rows Jack Smith and Kieron Walker and number 8 Rob Arbuckle took play into the Bramley 22. A clever kick over top by Full Back Kristian Keinhorst was well gathered by Inside Centre Luke Freer who went into the corner giving Ensians a 0-5 lead on 5 minutes. Unfortunately the conversion drifted wide.

Bramley were looking good with ball in hand using their big forwards and slick backs well. Solid defence from Back Rows Oliver Cooper and Sam Featherstone and Centres Luke Freer and Chris Westland kept Bramley from making too many yards. Good turnovers from Ensians allowed Fly Half Eaves to kick Bramley back into their own half.

Possession was back and forth between the two teams, both looking dangerous with ball in hand but both sides defence was strong and neither side could get over the try line. Bramley were penalised for being offside, Eaves put the ball into the corner. Hooker, Offer threw in and Ensians set up a driving maul. Hill peeled off the back and bulldozed his way over the line carrying the Bramley full back with him on 21 minutes. The conversion was missed so the lead was 0-10.

Shortly after the restart, Fly half Eaves suffered a dead leg so Centre Luke Freer moved to stand off and due to illness Ensians had no backs on the bench so speedy prop Michael Groves moved into the centres. This didn’t affect the speed of the Ensians attack in the backs and Bramley were under some serious pressure. Unfortunately the Bramley defence held firm.

For the last part of the half, it was Bramley’s turn to put the visitors under pressure. Again the Ensians defence was strong with great tackling from Walker, Smith, Offer, Jones and Arbuckle as the home side tried to use their forwards to make yards. Featherstone, Cooper and Hill were making some crucial turnovers and Freer or Keinhorst were able to clear the lines. Bramley’s rugby league backs were running hard but centres Westland and Groves were tackling hard as well as wingers Cowdell and Howarth. The whistle for half time went and Ensians went into the break 10-0 up.

The second half started much as the first had finished with Bramley in possession and pushing the visitors hard. Again the Ensians defence was solid and the home side couldn’t get over the try line. On 48 minutes Bramley spilled the ball on the Ensians 22. A great pick up of the loose ball from Ali Fothergill on for Smith in the second row gave Ensians possession with Bramley on the back foot. Slick handling from Jones and Freer set Arbuckle free who drew the defenders and put Cowdell into space. He showed the full back a clean pair of heals and went in under the posts. Keinhorst converted and the Ensians lead was increased to 17-0.

Again Bramley were on the attack, the Ensians defence was working tirelessly to keep them out, on 54 minutes a well worked attack by the home sides backs saw them work an overlap and score out wide. The conversion was missed and the score stayed at 5-17.

Freer had to come off with a pulled hamstring, Full Back Keinhorst moved up to stand off. Cowdell moved to full back. Back row Oli Cooper moved to the wing. Walker moved onto the blind side and Smith came back on into the second row. Groves moved up to his usual position of prop for Hill and was replaced with another front rower Paddy Phipps in the centre, Jim Dyson came on for Offer at Hooker.

Despite all the changes the visitors didn’t seem to be any less threatening with ball in hand or in defence. A great turnover in the Ensians 22 was followed up by an even better clearance kick by Luke Cowdell. A great chase by Cooper and Westland put the Bramley full back under a lot of pressure, he rushed the kick and Ensians regained the ball on ten meter line. With the Bramley defence unorganised, Keinhorst saw the space in behind, a perfectly weighted kick to the corner sat up perfectly for winger Howarth to run onto and score in the corner. Keinhorst again converted and the visitors lead was increased to 24-5 on 60 minutes. Also securing the bonus point.

Ensians were now putting Bramley under a lot of pressure. Great running from Fothergill, Arbuckle and Featherstone in the forwards was getting Ensians over the gain line. Lofthouse was distributing well and sniping round the rucks. Phipps and Westland were moving the ball well and Howarth and cooper were running hard. The Bramley defence was up flat and Keinhorst was cleverly putting the ball into the space in behind keeping the Bramley side pinned back.

Bramley were becoming frustrated with the lack of possession and began to give away penalties, Keinhorst took the opportunity to settle the game down a little and slotted over a goal to increase the lead to 27-5 on 72 minutes. Despite the constant pressure from Ensians, Bramley’s defence was still working hard and keeping the visitors out. The score line remained the same ‘til the end of the game.

The full time whistle went and brought an end to what had been a hard fought victory for the visitors played at a fast pace and had been a physical contest. Ensians are now looking towards the challenge of facing Goole at home next week, the team relegated from Yorkshire two last year, also having achieved two bonus point victories this season.

with the first 2nd team game been called off against aireborough 2nds at 11 ocklock on the Saturday before, players were obviously upset & angry, with players like conner paley texting - what a shame & lukeash texting - dam ! . A week on, the wheels within wheels turned again, to put a team together, this time it was against a unknown quantity called adwick le street, who were eager to come & play until Friday night at 6 oclock when they rang up and cancelled ! leaving tempo close to tears. After ringing the A team, john churchman & roger whit got to work & it was game on. With big eddy now travelling the world as a model & ambassador for best kebab, he couldn’t play unless ensians insured his looks & body for £15 or the equivalent of 2 mixed kebabs with cheesy chips, which was the first blow. Old 2nd team regular steve wade was next on the list, but neither al g or tempo could understand his new posh southern accent without a interpreter, so it was decided to let him go as he didn’t bring much to the team anyway. Yarnbury 5ths were a newly formed team made up of veterans & young lads, but were 2 short after losing them to higher teams. With a full team & 2 subs for ensians. ,it was decided to give the subs to yarnbury, to play 15 aside. Things looked good until ken lui rang up to say he couldn’t play because it was raining !, but turned up when the sun came out.. big eddy turned up when best kebab sacked him, after realising he had photo shopped his head onto tempos body for his calendar. The game started with x first team captain & wood cutter & coppice weeklys editor naphone rogers leaving the yarnbury defence for dead & scoring. within a couple of minutes he was over again after brett tenniswood kicked ahead for naphone to gather, with foz converting to make it 12 – 0 in as many minutes. Next to score was openside & ever balding ben smith after good hands by young joe tindall & conner paley, & a great break by dan ridgeway [ once voted the salvation armys 2nd most desirable man behind pope john paul ! ] . After a mix up at a yarnbury line out, ben smith was over again & with foz converting, it was 24 -0 on as many minutes. Yarnbury were trying to get moves together but with the backrow of greg knox, ben smith, ross nicols, with dom birkin from the second row, tackling anything that moved, the ball was regulary turned over & spun away with foz at scrum half to new zealands only pop star Johnny rah ! at ten. With one of the many turnovers, Johnny went blind & after pulling in the defence, put a great little pass for pocket battle ship, ken lui to race down the wing, & when he was tackled,he popped up a great little pass for foz to finish it. Big eddy was next to have a trundle with naphone scoring his hatrick from the damage done. After naphone scored again, young joe tindall finished the half by scoring after finding some space, & stretching his legs to outpace the cover & make it 52 – 0 at half time with 8 tries & 6 conversions from foz. At half time, tempo swapped naphone rogers & greg knox to yarnbury to try even it up, & give them some bite, & with the wind behind them, it made for a more even second half. With yarnbury finding some new energy within the team, they came back at otley & rattled up 3 tries within the first 20 minutes, with ensians getting lazy or knackered, & even managed to drop a couple over the line. Otley then managed to keep hold of the ball & drive into yarnburies defence with pete bonner making some good yards with boothy & cheesy. ross nicols was there to take the pass & score. A game wouldn’t be a game without Johnny rah doing his trademark show & go & he dummied his way over the line to finish the scoring at 64, with foz converting. A game played with uncontested scrums on the 1st team pitch meant many players thought they had farmers lung, but many thanks to yarnbury for coming down at short notice,