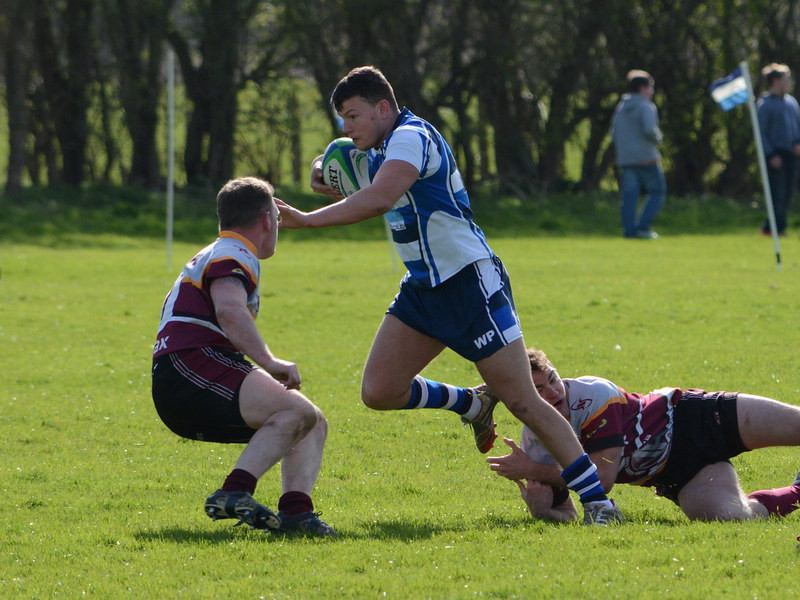 This home encounter had an extra edge in that opponents Burley were deep in the relegation zone and knew that they needed to come out on top against ‘Ensians to have any chance of avoiding the drop. A setback for the home side was the unavailability of both their speedy wingers, Declan Jackson and Will Howarth. In dry conditions with a strong end-to-end wind, the visitors took the game to the hosts with a confident performance through good use of the elements in the first half. The home side trailed 21 – 5 at the interval and despite making a surge late in the game, time ran out and they were unable produce the crucial final score.

The match got off to the worst possible start for the hosts when they were penalised for offside from the kick-off allowing the visitors to take a 3 – 0 lead on 1 minute. With their tails up, Burley used the wind to drive play into the home 22 where they mounted a series of attacks which kept ‘Ensians on the back foot for long periods. Under serious pressure, they then gave away penalties on 6 and 11 minutes which the visitors gratefully converted for a 9 – 0 lead.

‘Ensians then responded by putting some phases together and good drives from No.8 Lee O’Donnell, lock Ali Fothergill and prop Greg Jones helped to take play into the opposition half. The bigger visiting pack caused difficulties for the home scrum, but generally the home front row of Greg Jones, Jim Dyson and Josh Dyson managed to command their own ball. In the lineouts lock Ali Campbell and flanker Sam Featherstone were getting clean ball so half backs Alex Burnett and Ollie Eaves started to get their back line moving. Good interplay between forwards and backs saw Burley pressured on their own line. After one drive was held up over the line, prop Greg Jones blasted his way over in the corner on 30 minutes. The failed conversion took the score to 9 – 5 and it looked as though the home side were at last back in the game.

However, the visitors had other ideas and used the wind to take play into the home 22 where they proceeded to make good headway through strong running and timely offloading by both forwards and backs. As always, ‘Ensians tackled hard, but eventually they ran out of defenders on the left flank to allow the visitors to dive over in the corner. The conversion failed, but the lead was now stretched to 14 – 5 on 35 minutes. Again the Leeds side used the elements to push play back into the home half where attempts by ‘Ensians to move the ball upfield produced some strong runs by centres Nathan Rogers and Dom Oddy, but determined defence and turnovers soon had the visitors back on the attack. After a few close calls, Burley crossed again halfway out and the conversion took the score to 21 – 5 as the half time whistle blew.

The hosts had a lot to do, but with the wind in their favour they soon gained ground with powerful drives from locks Ali Campbell and Ali Fothergill. No 8 Lee O’Donnell made good progress through several impressive runs with flankers Featherstone and Keiran Walker providing good support. The wind made handling difficult so attempts by the hosts to move the ball wide often came to nothing and allowed Burley to gain possession and take play into the ‘Ensians’ half. There were some worrying moments as the visitors attacked the line, but when the home side did regain possession, there was a tendency to try and run the ball out of their own 22 instead of using the wind to belt it down the field.

Eventually the hosts did re-group and took play back into the visitors’ half, but attacking moves often came to nothing through poor handling with the strong Burley defence determined to come away with a win. For ‘Ensians, Paddy Phipps and Rob Lofthouse came on at flanker and scrum half respectively .The home side stepped up its efforts with both forwards and backs now battering away at the line before replacement centre Luke Freer eventually jinked his way through near the posts on 74 minutes. The conversion by full back Kristian Keinhorst narrowed the gap to 21 – 12.

The late rally by the hosts continued and they began to produce some of the slick handling which had been absent earlier in the game. On 78 minutes winger Luke Cowdell powered through several defenders to make a good break down the left and he was able to find centre Nathan Rogers on his inside to take the pass and sprint in under the posts. The conversion by Keinhorst moved the score to 21 – 19, but soon after the re-start, the referee blew for full time with Burley players and spectators jubilant with their vital victory.

This was a disappointing performance by ‘Ensians who only really came to life for short periods during a game littered with too many mistakes and wrong options. Burley were in desperate need of this victory and credit must go to them for producing a sound display in both attack and defence. 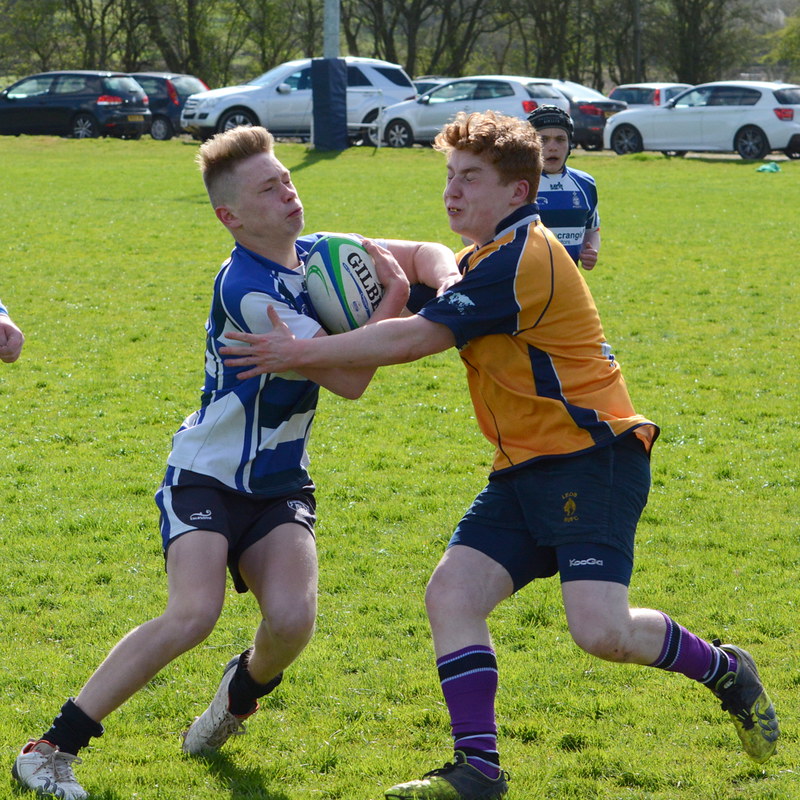 With team manager tempo suffering a rare virus, leaving him struggling to speak on the club dinner night, the changing room was sombre, until news arrived that he was feeling well enough to take up his post ! With a mix of ensians, viscounts, under 17s & a couple of Saracens, the day looked positive. The front row of bonner, wheely & the powerful sam pickering, with sensitive prop boothy on the bench would be a match for most. Jimmy & Turkish kebab pageant model big eddy supplied power with good looks & hookers-come-back-row-men jack graham & corbisero lookalike john offer made a solid backrow, with friendly ben at eight . Ben smith went to scrum half & promised to pass the ball [ bull sh* t ] . Will cooper went to stand off as jonny rah preferred the pub & with backs being in short supply, second row gentle giant mesher was crafted into an inside centre with young joe tindal at outside centre to look after him. Young max was on one wing, with 2nd row / prop ross nicols on the other. mothercare bouncer conner paley was at fullback.

Leos were out early going through their moves, while half the otley boys were in the changing rooms going through their port. The wind was blowing hard across the pitch which was to dictate play all day, with the line outs a lottery. The game started with Leos on the attack, but when otley got the ball, they worked it up the park, & from a maul close in, wheely scored. Will cooper converted to make it 7 – 0. With play being scrappy, the refs whistle was being blown more than dan ridgeways trumpet !, It took 30 minutes into the game, before friendly ben made a good break with bonner then mesh taking it on before big eddy broke his try scoring virginity to drive over the line to make it 12 - 0 [ only one to go}.

Half time came & the only change was ross nicols moved into the pack with jack graham moving to the wing. Boothy sportingly went on for leos to help in the front row, but when the hooker went off injured with a broken nose, the scrums went uncontested, which gave them a steadier supply of ball. From a scrum on otleys 22, the standoff forced his way over to make it 12 – 5 within 10 minutes of the second half. With Leos now moving the ball quicker, they started to threaten, with the winger dropping the ball with the line in front of him. Otley started to use their big runners who were causing Leos problems , with big eddy getting up to speeds of 3mph to flatten his opposite number. Ross nicols, who wanted to play in the pack, spent most his time in the backs but was carving big holes & with john offer supporting to keep the ball moving, it was only a matter of time before ben smith forced his way over, to make it 17 -5.

With wheely, bonner & sam making the hard yards with jimmy & eddy, the pressure was on Leos, & with ben & offer tackling or stripping the ball off Leos when they got their hands on it, it wasn’t long before ross went in from a maul close in, to make it 22 – 5. From the kickoff, Leos put the ball up high, but big eddy was underneath it waiting. Would he run the length of the field someone said ? unfortunately his hands were like cows tits so the moment passed by. Will cooper was having a great game, keeping the Leos 10 quite & changing his game to keep them guessing, kicking over the top for the wingers to chase or using youg joe, ross or mesh to give their backs a headache. Ross broke through again to score & john offer finished off a good game at backrow to score on time to make it 32 – 5. This was not as easy as the score suggests with leos causing problems all day, but once the otley forwards got a sniff of the line, they had the size & experience to get the ball over the whitewash.