It was blustery but sunny conditions that faced the Ensians as they attempted to delay Castlefords promotion to Yorkshire 2 for another week. With a bonus point win the home side would be promoted in 2nd place behind Old Grovians.

Castleford came out of the blocks quickly using their sizeable forwards to create good ball for their solid backs to work their way into the visitors 22. Some solid defence from flankers Sam Featherstone and Matt Taylor meant the Castleford attack came to nothing.

The Ensians front row of Pete Bonner, Greg Jones and youngster Paddy Phipps were in for a tough time against the larger Cas front row. After 5 minutes second row Ali Fothergill had to leave the field with a head injury so Zak Stead came on into the back row with number 8 Rob Arbuckle moving forward.

Castleford were keeping the pressure on the visitors not allowing them any possession. Only a feaverant defensive performance from Ensians was keeping the home side out. On 10 minutes Castleford were awarded a 5 meter scrum. Using their scrum dominance pushed over to score. The conversion was missed keeping the lead to just 5-0.

Castleford again were on the attack. Good tackling from Stand Off Oli Eaves and Centres Dom Oddy and Luke Cowdell were meaning the home sides attacks were not making much ground. Using their big forwards to drive in around the ruck was gaining them some ground but good tackling from Second Row Ali Campbell, Stead, Arbuckle, Jones and Phipps kept the Castleford attack at bay. Ensians good defensive payed off with some good turnovers pushing Castleford back.

A poor kick chase allowed Cas some good possession. Missed tackles in the midfield allowed them to get in behind and despite some good last ditch tackles from wingers Will Howarth and Declan Jackson and Full Back Kris Keinhorst, Castleford scored again. This time the conversation was successful and the home lead was increased to 12-0 on 18 minutes.

A good turnover by Arbuckle and quick thinking from Scrum Half Rob Lofthouse allowed pacy winger Howarth to make a great break up into the Castleford 22, well backed up by fellow pace man Jackson who was tackled high. Ensians were awarded a penalty. The visitors kicked to the corner. A good take at the front allowed Ensians to set up a driving maul. When the ball was released to the backs Castleford were offside. This time Ensians were in front of the uprights so Keinhorst slotted it over to reduce the deficit to 12-3 on 25 minutes.

After the restart Rob Lofthouse had to leave the field with a knock to the knee. Kris Keinhorst moved up to Scrum Half and Connor Bateman came on to Full Back.

A good line out steal at the front by Taylor allowed Ensians a good opportunity to attack. Quick ball through the backs gave Bateman to make a good break up the field. This time it was Ensians turn to put the home side under pressure but their defence held solid. Winger Will Howarth took a knock to thr head and had to leave the field. Natan Rogers came on into the Back Row, Stead moved to his usual Full Back role and Connor Bateman moved across onto the wing. The half time whistle went with the score at 12-3 but the visitors having the better of the possession.

Despite the conditions deteriorating, Ensians made a positive start with a good restart chase putting the home side under pressure. Great tackling from Bonner and Featherstone and a good turnover by Jones allowed the visitors some good fast ball. Great interplay between the backs and forwards took play deep into the Castleford 22. The ball was recycled quickly and Rogers scored. Bateman was successful and the deficit was down to 2 points with the score at 12-10 on 50 minutes.

Again Ensians were on the attack again with some great forward play from Jones, Arbuckle and Taylor. Keeping Castleford in their 22. Keinhorst and Eaves were giving quick ball with Cowdell and Jackson threatening outwide. A clever cross field kick was taken back over the line by the Castleford Full Back and the visitors had a 5 meter scrum. Dom Oddy was held up over the line. A series of scrums on the 5 meter were defended well and the home side kept the visitors out. A high tackle penalty saw Bateman slot a goal on 55 minutes to give Ensians the lead for the first time with the score at 12-13.

Castleford were under pressure from the visitors again but an infringement by Ensians gave them an opportunity to clear their lines. A solid drive from the line out got the home side into the Ensians 22. The momentum seemed to have swung back to Castleford and a series of powerful pick and drives saw them score outwide on 60 minutes against the run of play. The conversion was missed giving the home side a 17-13 lead.

Ensians suffered another injury. Stand Off Oli Eaves turned his ankle. Keinhorst moved to a more familiar Stand Off role. Nathan Rogers moved to Scrum Half and Lee O'Donnell came on to fill the hole in the Back Row.

Castleford were again on the ascendancy using their big forwards well to create quick ball for their backs. Unlike the visitors the home side were able to convert the pressure and they scored again. This time the conversion was good and the lead was extended to 24-13 on 65 minutes.

Much like the first 15 minutes Ensians were having to defend hard with little to no possession. The visitors were trying to keep a feaverant Castleford bay who were trying to secure the bonus point try and promotion with some big tackles from Oddy in the centers and Featherstone, O'Donnell and Phipps in forwards. Ensians were penalised at the ruck again giving Cas an opportunity to kick to the corner. The driving maul was well defended but the space was created outwide for their backs to score. The conversion was on target taking the score to 31-13 on 77 minutes.

The visitors were not for lying down. A turnover from the restart gained them the ball back. Some good forward play took the ball into the Castleford 22. Rogers made a powerful drive but was brought down just short of the line. The whistle went and the game finished at 31-13 to Castleford.

Ensians made the home side work very hard for their win and the game, was perhaps far closer than the score suggested. The main difference being how clinical Castleford were at scoring opportunities. They were deserving of their win and promotion to Yorkshire 2. Best of luck to them next season. 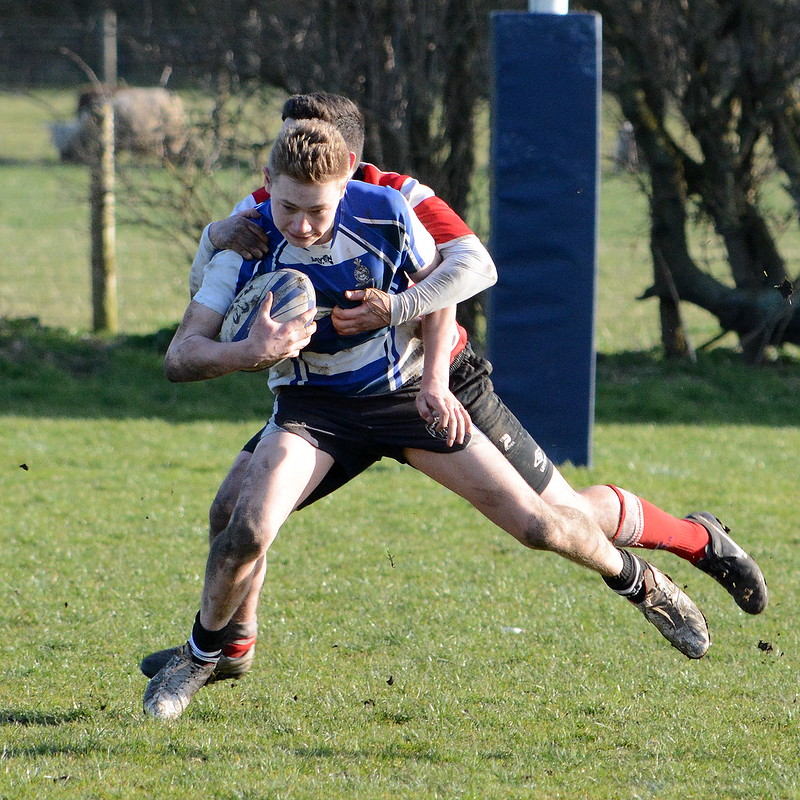 With numbers up to 21, with 7 ensians, 7 viscounts & 7 under 17s, the day looked sunny ! but Cleckheaton had other ideas. With a changed back line again, will cooper went to 10, welsh choir boy ieuan at 12, joe tindall at 13, with young tom on one wing, ed goodwill on the other & conner paley moving to 15. With Cleck having some big lads in the pack, the otley boys were going to be up against it, so the more light weight flying Scotsman jock was benched for the more matured bodied ben. With ross nicols, jack graham & boothy in the front row, it had youth, tenacity & a calm old head [ or so we thought ]. The second row was jimmy & matty t, with a backrow of captain for the day – ben smith, mature ben & Jamie chapel at 8. With a bench full of young legs, things looked positive.

With the usual problem of trying to get the older gentlemen out of the changing room until they have put their control pants on with their tenor ladies in, it meant the first 15 minutes were going to be lethargic, & so it proved. Cleck were quick out of the blocks, with strong running from forwards & backs, to score off a rolling maul on 2 minutes to make it 5 – 0. Otley came back at them, but time & time again, ball secured by the forwards was picked up & run up players own backsides,with ben smith the main culprit, either getting turned over, penalised or held up for Cleck to get the ball at the scrum. [ even though he was having a great game besides ]

Cleck used their possession well, & scored on 20 minutes to make it 12 – 0 with the conversion. With the referee penalising otley for various reasons, on a regular basis, frustrations were bubbling, with old head boothy seemingly not doing anything right. It finally boiled over when while he leapt like a salmon [ in his words ] to catch a ball & call a mark in his 22, the Cleck fullback followed through late to take him out. To make matters worse, the ref penalised him, which caused him to throw his dummy, toys & blankets out of his cot, & soil his nappy! With various explanations of what he thought of the ref, a yellow card was always going to be the outcome for the calm old head boothy!. With the Cleck backs coming up fast, will cooper was under pressure all afternoon, but welsh choir boy ieuan cranshaw was ducking & diving to cut through & make room for young joe , & chances were created, but poor passes or good Cleck defence snuffed them out.

Cleck scored again, with their speedy winger racing in to make it 17 – 0 at half time. With a few changes made to bring fresh or young legs on, the game got better for otley, with young matt Edmondson moving to the back row with ed goodwill. It meant that if ben smith ran up his own backside, they were there to spare his blushes. With bret tenniswood leaping in the lineouts like steve wade [ only higher & more technical ], it meant otley were now taking Clecks ball & building phases. After another break by ivan, ross nicols went over to make it 17 – 5. With a strong cross wind, hooker jack graham was struggling to hit his man, but in the loose he was everywhere tackling & causing Cleck problems, & from a break he was tackled just short, but with otley now having the momentum, matty t went in from close to make it 17 – 10.

Cleck started kicking for position, but conner paley, with young max & lukeash were running it back at them, trying to keep the ball alive, with young joe making a break, but couldn’t finish. Ben smith made another break, but didn’t pass [ same old! ] , ross nicols tried a sunny bill Williams when a simple pass would of worked, blah blah blah ! chances came & went until ed goodwill went over from a maul to make it 15 – 17, & this is how the game ended. With most spectators expecting a cricket score after the first half, otley did well to turn the game around against a good Cleck side, but as Jamie & tempo counted the chances missed, a win should have been on the cards, even with Cleck having Simon Wilson’s love child playing for them !