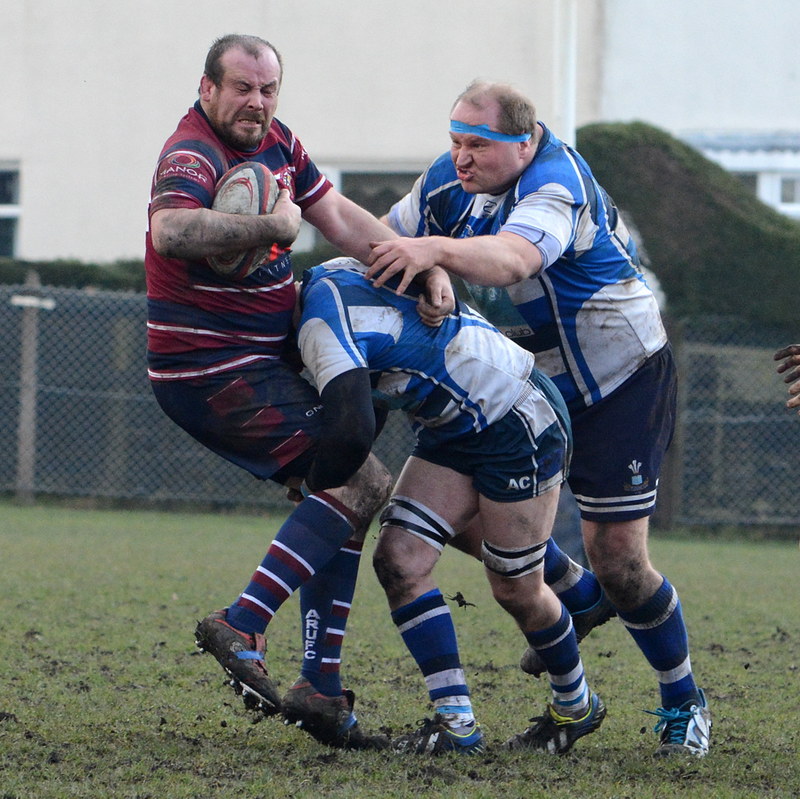 In this fixture which was re-arranged due to a frozen pitch in December, ‘Ensians dominated the first half by running in five excellent tries to one from the hosts. However, for the second week running their performance fell off dramatically after the break when they failed to add to their score and spent much of the half on the back foot as Aireborough gained in confidence and responded with two tries of their own. Although this bonus-point win was never really in doubt, the visitors will be anxious to address the reasons for the worrying failure to maintain momentum.

With the pitch in surprisingly good condition, ‘Ensians made a lively start with half backs Rob Lofthouse and Ollie Eaves wasting no time in getting the back line moving. On five minutes full back Zak Stead joined the line, sliced through the middle and fed lock Ali Campbell who went over near the posts with centre Will Foster adding the conversion for a 7 – 0 lead. The visitors’ lineout was working well through lock Jack Smith and flanker Sam Featherstone and when the ball was spun wide, young winger Will Howarth used his pace in an elusive run up the left wing, weaving his way through three defenders to score half way out. The conversion failed leaving the visitors with a 12 – 0 lead.

In the scrums, the visiting front row of veteran Peter Bonner, Jim Dyson and Ross Nichols managed to hold their own against a solid Aireborough eight with No. 8 Rob Arbuckle and flankers Featherstone and Lee O’Donnell making inroads into the opposition territory. The ball was whipped out wide and good interplay between forwards and backs put flying winger Declan Jackson away up the right flank to round the cover and go in under the post. Foster’s conversion stretched the lead to 19 – 0 on 20 minutes.

Aireborough’s lineout was working well and through a penalty and good support play, they worked their way into the visitors 22 where they put in some powerful forward drives. After a failed clearance kick, ‘Ensians riskily tried to move the ball on their own line and a dropped pass allowed the home side to gratefully fall on the loose ball to take the score to 19 – 5. Visitors’ full back Stead moved into the centre to replace the injured Dom Oddy and Kristian Keinhorst filled the full back berth as the side continued to attack.

The visitors were soon causing more problems for the hosts as lock Jack Smith, No.8 Rob Arbuckle and flanker Lee O’Donnell put in strong runs. Centres Foster and Stead took play into the home 22 where good support play from the forwards allowed hooker Jim Dyson to scamper over half way out. Foster’s conversion lifted the score to 26 – 5 on 31 minutes. Winger Will Howarth was a constant threat making another good run up the touchline to pressure Aireborough in their 22. Good backing up saw prop Ross Nichols throw a looped overhead pass which found its way to Howarth who dived in at the corner for his second try. The conversion failed with the score 31 – 5 at half time.

After the break, winger Declan Jackson was again on the attack, but was bundled into touch as he threatened up the right wing. The visitors then started to give away penalties through such things as failing to release after the tackle and offside and the home side gratefully drove play into the opposition 22 through the trusty boot of their fly half. With ample possession and territory, the home side were able to go through the phases and they eventually breached the defence on 58 and 73 minutes. With one conversion, the score stood at 31 – 17.

Although the visitors put a lot of effort into defence, it was disorganised with hurried clearance kicks and jittery passes. Experienced lock Richard Smith came on for the last ten minutes and managed to bring some order to the scrappy goings-on. In the closing seconds after being awarded a penalty, ‘Ensians ended up in the home 22 and managed to work the ball towards Jackson on the wing, but the final pass went astray to leave the score at 31 – 17.

Despite being comfortably in control in the first half, the visitors never really clicked after the break as their teamwork seemed to desert them, allowing Aireborough to capitalise on frequent errors and wrong options. With several stiff away games facing them, ‘Ensians will have to work on keeping their enterprising play going for the full 80 minutes.

With Ensians 1sts having a few injuries, it meant the 2nds could only muster 8 players, but with Jonny Rah dropping out late on they were down to 7. After meeting at the Maypole, there wasn’t much to dance about as they realised the numbers were down. Lets hope the Viscounts are mob handed was the talk as they walked down to the Otley ground to meet up, but Otley only had 5. Saracens did not have a game, but as usual, none of them were willing to drop down to help there 3rd team mates out. The Otley 3rds / ensian 2nd travelled across to York with 12. With team manager Tempo late due to work commitments, he travelled across alone with many negative thoughts of why do i bother, & on arrival 15 minutes into the game, with Otley behind their own sticks, he feared the worse. How wrong could he be ! After talking to Micky peel & being told the scores were 7 apiece, he realised you should never lose hope! York & especially, their captain showed why rugby is such a great social game by playing for Otley , & giving them a no 8, who gave his team mates a headache all day, along with himself. Usually, if teams lend you a player, they give you there worst players who just get in the way, or just don’t try, but without these two, the score would have been very different. With a major shuffle round to make a team, Wheely moved to prop along with Bentleys star joiner tom twist. Angry scotsman Jock moved to hooker, with paper making specialist Brett in the 2nd row with best kebab pin up boy, Big Eddy. The back-row consisted of the 2 york boys with allround gentleman & Viscounts legend Jamie chapel. Alex Longstaff played 9, while Matty Tenniswood played ten. With a centre partnership of marine boy Matt Taylor, & prop come solid centre paddy, the ship looked steady. Conner Paley played on one wing with backrow & now hat trick superstar Kieran Walker playing fullback come other wing. York had a big experienced pack and a good backline, with a big south sea islander at 13, causing problems all day. Conner Paley had a good run only to be pushed into touch. York came back, but Matt Taylor turned over the ball & Conner was off again, he passed to Brett who popped it to alex Longstaff, but a poor pass ended the move, but the writing was on the wall. With twisty & Wheely helping Jock to hook the ball at scrum time, the backs got a steady supply & Matt Taylor put young paddy through a gap & he drew the fullback before passing it back to Matt to score under the posts. Conversion by Matty Tenniswood, who kicked fantastic all day made it 14 – 7. With Brett & Jamie leaping like salmons, good line out ball gave Otleys loaned number 8 a barging run before offloading to Jamie chapel who drove it in, but with some wandering hands in the ruck, Matty kicked a penalty to make it 17 – 7. Otley were on fire now with Big Eddy chuffing like Thomas the tank engine as he went on many of his famous trade mark runs, with the York boys & rest of the pack in support looking for the offloads, then Kieran Walker popped up in the centre to cut inside & score to make it 24 -7 at half time. The half time team talk was not to let them back into the game, but with York coming out with all guns blazing, they were over the line within 5 minutes from a drive from a penalty to make it 24 – 12. With Otley now throwing sloppy passes & tackling high, the big york centre cut through to score & it was game on at 24 – 19. From the kick off York attacked & Matt Taylor was yellow carded when he fell on the wrong side of the ruck, but Otley defended with their lifes & cleared their lines to take play to the half way line. This is where Big Eddy became Eddy Farrell / Wilkinson / ford as he hoofed the ball up into the air with the accuracy & finesse of a man his size, & as Tempo sank to his knees screaming no ! no! It bounced not once , but twice to evade the full back & into the arms of the chasing Conner Paley who managed to keep hold of it for once & score under the posts, & as Matty T converted, Big Eddy jogged back to his own half with the smug look of Jonny Wilkinson when he kicked the winning drop goal in 2003. At 31 – 19 it gave Otley breathing space while Matt Taylor was in the bin. From kick off they turned over the ball with Matty T having a good run before off loading to the marauding 8 who popped it to Kieron to score to make it 38 -19. York came back & scored nearly straight away after slack tackling to make it 38 – 26, but with Matt Taylor just out of the sin bin, mad scots man Jock was sin binned for fighting,for events in Jocks words - that nearly happened & could have been dangerous? [ you work it out for yourself ]. [ no punches connected ]. Conner Paley had another great run & put the ever supporting Wheely in for a well deserved try, before Matt Taylor made a great break, before the ball was spun across the back line for Kieron Walker to dummy & cross, to get his hat trick & make it 52 – 26 with Matty T kicking everything . Not to be out done, York came back & even with Kieron w making some great try saving tackles, they scored twice more to make the final score 52 – 26. Many thanks should go to the Otley / Ensians lads who kept the faith &the York team & lads who played out of their skin for Otley, with York keeping the numbers even at 14 apiece to make for a fair game which was played in good spirit. [ apart from Jocks nearly / could of incident. ]