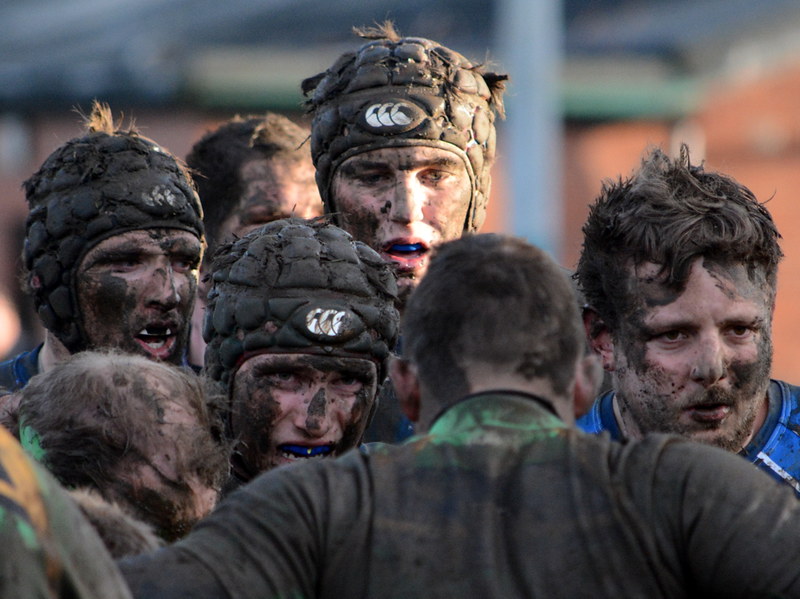 A COLD BLUSTERY WIND, REMNANTS OF SNOW AND A PITCH WHICH TURNED MUDDY EVEN IN THE PRE-MATCH WARMUPS SUGGESTED A FORWARD-DOMINATED GAME. IN FAIRNESS, BOTH SIDES THREW THE BALL ABOUT AND ATTEMPTED SOME RUNNING RUGBY, BUT, AS EXPECTED, THE PACKS ENJOYED SOME HEFTY EXCHANGES AND IT BECAME HARD GOING.

BEFORE ALL THAT, THOUGH, ‘ENSIANS KICKED OFF WITH A LOW “GRUBBER”, BRAMLEY KNOCKED ON AND THEN CONCEDED A PENALTY, ALLOWING THE VISITORS TO ESTABLISH FIELD POSITION FOR A DRIVING LINEOUT. THEY EXECUTED THE MAUL WELL AND ALI CAMPBELL WAS DRIVEN OVER FOR A TRY. THE CONVERSION NARROWLY FAILED. WITHIN MINUTES, ‘ENSIANS SCORED A LENGTH-OF-THE-FIELD TRYAFTER A FOOT CHASE GAVE WINGER DECLAN JACKSON THE CHANCE TO SHOW HIS SPEED IN THE MUD AND WIN THE RACE FOR THE TOUCHDOWN. THE CONVERSION BY KRISTIAN KEINHORST GAVE THE VISITORS A 12-NIL ADVANTAGE AFTER ONLY TEN MINUTES.

BRAMLEY CAME BACK STRONGLY AND FOLLOWING SOME REAL PRESSURE AND GOOD RUCKING, OPENED THEIR ACCOUNT WITH 5 POINTS ON THE BOARD, THE EXTRA 2 DENIED BY AN UPRIGHT. ‘ENSIANS MISSED A PENALTY OPPORTUNITY AND THE FORWARD PLAY BECAME ATTRITIONAL, WITH BOTH PACKS TACKLING WITH DETERMINATION AND SKILL. AFTER A PERIOD OF PLAY ON THE GROUND, BRAMLEY SUDDENLY BROKE AWAY INTO OPEN SPACE AND SCORED WIDE OUT. A DIFFICULTCONVERSION INTO THE WIND MISSED AND THE BOARD READ 12-10 TO THE VISITORS. THE VISITORS WERE NOT CAPITALISING ON OPPOSITION MISTAKES AND EVEN A JIM DYSON STRIKE AGAINST THE HEAD CAME TO NOUGHT WHEN A KICK AHEAD WENT DIRECTLY INTO TOUCH; ON THE OTHER SIDE, A BRAMLEY PENALTY KICK ACTUALLY LOST GROUND INTO THE WIND, BUT THAT WAS QUICKLY FORGOTTEN WHEN THEY WON THE LINEOUT AND AGAIN FOUND SPACE. GOOD, SIMPLE, PASSING SAW THEM ROMP AWAY FOR AN UNCONVERTED TRY. THE HOME SIDE NOW LED BY 15-12!

‘ENSIANS BEGAN TO GAIN SOME POSSESSION AND A RUCK TURNOVER GAVE OLLY EAVES THE CHANCE TO KICK THE BALL INTO THE RIGHT AREA OF THE FIELD, BUT PLAY BECAME SCRAPPY AND ERRORS ON BOTH SIDE PREVENTED ANY MORE SCORING OPENINGS. CONDITIONS UNDERFOOT WERE NOW VERY DIFFICULT AND A HALF TIME LEAD OF 15-12 TO BRAMLEY AGAINST THE WIND SUGGESTED A SECOND HALF SLOG FOR THE VISITORS. SKIPPER NATHAN ROGERS HAD TAKEN A KNOCK AND WAS SUBBED.

AFTER THE BREAK. BRAMLEY USED THE WIND AND SOON ESTABLISHED THEIR POSITION IN ‘ENSIAN TERRITORY. THE VISITORS’ TACKLING BEGAN TO FALL OFF AND BRAMLEY TOOK ADVANTAGE, RUNNING WELL AND MAKING GOOD YARDS. THEN, SOMEWHAT AGAINST THE RUN OF PLAY, THE VISITOR PINNED THE HOME SIDE IN THEIR 22 AND EXERTED INTENSE PRESSURE IN SCRUM AND RUCK. THE PICK AND DRIVE WAS EFFECTIVE, WITH PLAYERS SUPPORTING EACH OTHER AND RETAINING POSSESSION, BUT THERE WAS NO WAY THROUGH AND EVENTUALLY THE BALL WAS SPUN WIDE. THIS SWITCH OF PLAY FAILED WHEN A HANDLING ERROR ALLOWED BRAMLEY TO HACK THE BALL OUT OF DANGER AND INTO ‘ENSIANS’ HALF OF THE FIELD.

IT WAS NOW BRAMLEY’S TURN TO DOMINATE AND AFTER PENALTIES TO THE VISITORS FAILED TO GET THEM OUT OF TROUBLE, A SCRUM ON THE LINE SAW ‘ENSIANS PUSHED OFF THE BALL. ANOTHER PENALTY WAS WASTED WHEN IT MISSED TOUCH AND BRAMLEY RAN THE BALL BACK, PINNING THE VISITORS IN THEIR 22. YET ANOTHER PENALTY FAILED TO RELIEVE THE SEIGE, A BRAMLEY LINEOUT AND DRIVING MAUL PROVED TOO MUCH FOR THE ‘ENSIANS AND A TRY WAS CONCEDED. THE EXTRAS WERE ADDED AND AT 22-12 WITH NO TIME LEFT, THE VISITORS HAD TO REFLECT ON 12-NIL UP AFTER TEN MINUTES, ONLY TO SHIP 22 UNANSWERED POINTS THEREAFTER. THE GAME WAS HARD AND FAIR, THE REFEREE HANDLED THINGS WELL AND ULTIMATELY 4 TRIES TO 2 TOLD THE STORY. MID-TABLE IN YORKSHIRE THREE SHOWED RUGBY IN A GOOD LIGHT TODAY.

After nearly beating a combined bailden firsts / seconds last week, hopes were high for win against Keighleys development side, but with influential back row man Duncan settrington not available, & captain will foster suffering from age [ when the body struggles to cope ] & pete bonner called to the first team bench, it was going to be a mammoth task against a very good keighley side. With tom twist available after first fitting a bathroom with his dad, the old grey fergi which is wheely [ he just keeps going ] & boothy, [the only man i know who has a bottle of port before a game rather than a red bull ], the front row was solid. The engine room had first team potential – big eddy, & matty tenniswood [ has to start or he will sulk ], with a backrow of Kieran walker, who was coming back from injury at 7, don’t panic mr mannering – jock at 6, with everyoung Jamie chapel at eight. The safe hands of alex longstaff was at 9 with pop star Johnny rah at 10. fozzies big shoes at 12 were filled by marine boy matt taylor, who was on leave after probably invading an island somewhere in the world. Outside centre paddy missed his bus so ben smith filled his place at 13. The back three were made up of wingers, conner paley & will Howarth with conner bateman at full back. On the bench was the old badger, rich crossley, britains got talent flute player dan ridgeway, brett tenniswood [ mattys older brother ] & paddy – because he was late !

The game started with Keighley using their big centre to try punch holes, but once otley got hold of the ball, matt taylor popped a great ball to conner bateman, who ran a great line from fullback to scythe through & score, & convert to make it 7 – 0 within 2 minutes. Keighley attacked from the kickoff, until well known / on loan prop cabbage tried what no man should try when carrying twins !, a chip & chase, which will Howarth caught & passed to conner bateman [ the two fasted men on the pitch ] who then ran the length of the field to score in the corner & make it 12 – 0 on 7 minutes. With the otley scrum working really well, wheely took one against the head & Jamie picked from 8 to set up another attack. After a loose pass went to ground, will Howarth picked up the ball, & with three keighley men around him, it was like a little explosion going off as they were left grasping air and will was gone, & after gassing another two players on the way to the try line, it was 19 – 0 on 10 minutes with conner batemans convertion. Keighley were shell shocked, as they weren’t playing badly but had just being hit by some great individual play by conner & will. From the kickoff big eddy had one of his trade mark runs, bouncing a few off before passing to his 2nd row partner matty, who took it on, but Keighley weren’t going to lie down, & the rest of the half was played with both sides putting good moves together in forwards & backs to gain ground only for equally good defence to snuff them out, until nearly half time when will Howarth picked up another loose ball & put the after burners on to leave various players for dead, & put down under the sticks to make it 26 – 0 on the whistle. With all the subs coming on during the first half or for the second half, things looked good with the game plan to keep using the solid running of matt & paddy in the centres & the speed of the back three, with conner paley unlucky not to hold on to a couple of passes in the first half. The 2nd half started with keighleys big centre making a great break, only for matt taylor to hold him up with the try line inches away & with the rest of the pack drove him back to get the scrum, but with boothy off injured, wheely moved to prop & jock put himself in the dark place which is hooker. Unfortunately it was taken against the head & moved quickly for Keighley to score in the corner. From the kick off otley attacked, but Keighley now had their heads up & with big eddy getting between the ruck & Johnny, the ball was coming back into the Keighley forwards who stripped it off him with ease, for their big number 8 to make good yards for them, along with the hard running centre. Again matt taylor turned the ball over when Keighley were going over, only for brett tenniswoods attempted clearance kick to be charged down to make it 26 – 10. Otley were still playing good rugby with wheely, boothy & brett boshing it up, but time & again greedyitus spoiled the moves, with ben smith, now at back row, running it up his own backside ! alex longstaff taking it on with 3 men outside, twisty showing a dummy with a 2 man overlap & Kieran walker not looking for the pass after doing all the hard work. Keighley came back again & scored to make it 26 – 17, & poor tempos heart rate was going through the roof ! With the backs now not seeing much ball, with Johnny rah coming back inside from 10, it took marine boy matt to save the day when he took the ball from a move off the back of the scrum to crash over, & with a great conversion from conner bateman the game finished 33 – 17 shortly after. With otley now having a good backline to go with a strong pack, things are starting to look good.