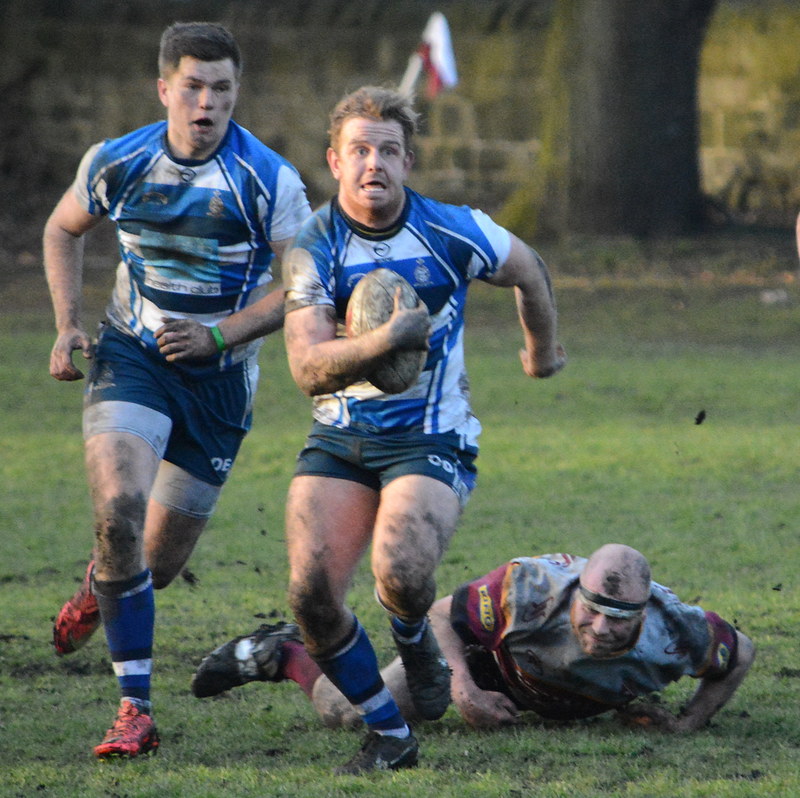 Despite bad conditions through the week, it was a relief to all when the pitch at Burley was deemed playable for this already delayed fixture. Despite the fact that Burley have been struggling in the league of late the visitors were not going to take anything for granted, with Burley having a big forward pack and the pitch been very boggy underfoot.

From the outset it was clear that Ensians would have the edge in the backs but the forwards were going to have to work hard to give them a good platform to play off. Ensians, playing up the considerable slope, fielded the kick off well and worked their way up the pitch through good drives from locks Jack Smith and Ali Campbell. The Burley back row made a good turnover on halfway, however possession was short lived, as fly half Oli Eaves made a great interception to break out into the home 22, some good support play from winger Declan Jackson saw him fall over the line to finish off the break out wide. The conversion was missed and the visitors were 0-5up after a couple of minutes.

Burley were using the slope well, keeping the visitors pinned in their own 22. The home side were pressurising well but some great defence from Eaves and Centres Luke Freer, Nathan Rogers and Open Side Oli Cooper meant Ensians held their lead. Burley were awarded a series of penalties but elected to kick to touch and the visitors defence held firm and home side came away without any points.

The Ensians forward pack was working really hard to provide the platform for the backs with the front row of Josh Dyson, Jim Dyson and Rob Lyon having to work hard against bigger opposition. Stand in Scrum Half Kristian Keinhorst was giving a good service but with the conditions underfoot and the slope the visitors backs were struggling to make ground despite good running from Rogers, winger Dom Oddy and Full Back Connor Bateman.

The home side were really putting Ensians under pressure with strong drives from their forwards and darting runs from their lively Half Backs but again some great defence from the visitors kept them out. Number 8 Rob Arbuckle and Blindside Lee O’Donnell putting in some big hits to keep Burley out. Despite this great defensive effort the sharp Burley Scrum Half took a quick tap penalty and caught the visitors unawares to bring the scores level with the conversion giving them a 7-5 lead around the half hour mark.

The home side went into the break with a slim lead but Ensians were confident with the slope favouring them. At the break Connor Bateman made way for Keinhorst to move to his usual full back position with youngster Sean Leddy coming on at Scrum Half. The visitors made a great start with a fantastic kick off from Freer, allowing the home forwards to pressurise the home side and gaining a turnover penalty. This was converted by Keinhorst and the visitors took a 7-8 lead.

Ensians were now putting the home side under pressure but a series of infringements at the breakdown saw the visitors down to 14 men with a yellow card going to Lock Smith. From the resulting penalty Burley regained a 10-8 lead with a successful conversion on 45 minutes.

Going down a man seemed to spur Ensians on, upping the intensity and pace of the game. Leddy was giving the backs quick ball and they were making good headway with some good lines from Rogers. The forwards were making some good yards through drives from the Dyson brothers, Arbuckle and O’Donnell sucking in the home defence to create space out wide. Burley infringed at the breakdown and the visitors regained the lead with a well struck kick from Keinhorst bringing the score to 10-11 on 50 minutes. Hooker Jim Dyson took a knock so Lyon moved across to Hooker, Arbuckle moving up to prop on the tight head side and Sam Featherstone on in the back row, getting into the swing of things after a long injury lay off.

From the restart Ensians were on the attack again keeping the home defence under pressure especially in the wide channels. Rogers playing out of his skin was carving holes in the Burley back line making great yards. After some great interplay the ball was chipped over the top and winger Oddy grounded the ball, the Burley Full Back had taken out an Ensian player off the ball and the referee awarded a penalty try. Keinhorst converted and the visitors stretched their lead to 10-18. Smith returned to the field with Ensians 10 points better off.

Ensians were using the slope to their advantage with some good kicking from Eaves and Freer keeping the home side pinned in their own 22. Great defence from Cooper, Campbell and Featherstone meant with the ball the Burley were struggling to gain ground as Ensians had in the first half.

Ensians were pressing hard to increase their lead with some great interplay between the backs and forwards and a supply of good quick ball from good rucking, Leddy was really able to get the back line moving, however, Ensians were not clinical and the home side were let off on a couple of occasions.

On 65 minutes the visitors were again down to 14 when O’Donnell was given a yellow after a series of offside penalties in defence. The home side was unable to make the numerical advantage count with some more solid defence from the visitors. The numbers were soon level again after the Burley 6 was Yellow carded after a fracas at the breakdown.

For the rest of the half Ensians had Burley stuck in their own half but were unable to increase that lead any further with the full time whistle going with the score at 10-18. Ensians were happy to come away with a win in conditions that didn’t suit their style of play. All credit goes to Burley who made the visitors work very hard for every point.