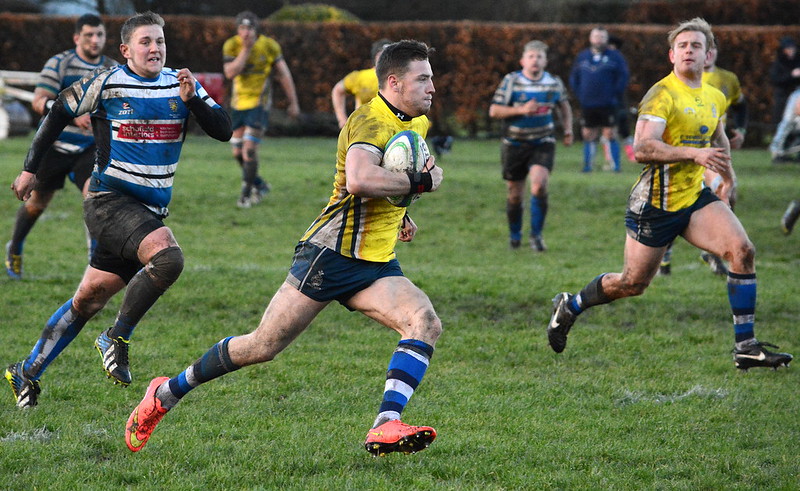 Having played only two first team fixtures since 1st December ‘Ensians were keeping their fingers crossed that Saturday’s fixture would not cause another postponement due to the weather. However as the three games already re-arranged were to be away games (and in each case the ‘Ensians pitch was playable) the pitch at Chaffer’s Field was suitable although quite wet.

It was a cold afternoon with sleet showers and snow lying on the hills with ‘Ensians playing into a light breeze for the first half. ‘Ensians started brightly with Jack Smith prominent in the lineouts and the forwards taking a scrum against the head.

However a pivotal moment of the game came in the fifteenth minute when Declan Jackson made a neat kick ahead deep into the visitors’ 22 and in following up collided into two defenders all three finishing up on the turf and the ball going loose. Dominic Oddy snapped up the ball to score a try between the posts duly converted by Declan Jackson:—7—nil to ‘Ensians.

For the next twenty minutes play was even mostly between the two 22’s...The’Ensian backs made some forays into Thorn territory but the defence held. When the visitors attacked they were harassed into making errors to enable the home team to relieve their territory. The ‘Ensians defence was outstanding with Ollie Eaves prominent.

The home team’s fitness told in the last few minutes of the half with fine lineout ball and tight scrimmaging giving good possession and the backs causing panic in the visitor’s defence. A penalty for ‘Ensians was the result converted by Kristian Keinhorst giving a half time score of 10---nil to ‘Ensians.

The second half started with Thornensians spending much of the first ten minutes in the home 22.Firm defence was needed with Ali Cooper taking the visitor’s lineout ball after a penalty and good relieving kicks from Kristian Keinhorst and Ollie Eaves. Following a super tackle by Ollie Campbell the ball was turned over and a superb kick by Zak Stead took play into the Thorn 22 for the first time in the half.

The rest of the match took place in the Thorn half .The home forwards fought valiantly to put continuous pressure on the Thornensian pack each and every forward striving one hundred per cent. On the occasions when the backs came into play Nathan Rogers and Declan Jackson combined to create panic in the visitors defence but were unable to get over the line.

The final whistle went with a well deserved victory ten nil to’Ensians.The team gave a great display to avenge the heavy defeat they suffered at Thorne earlier in the season