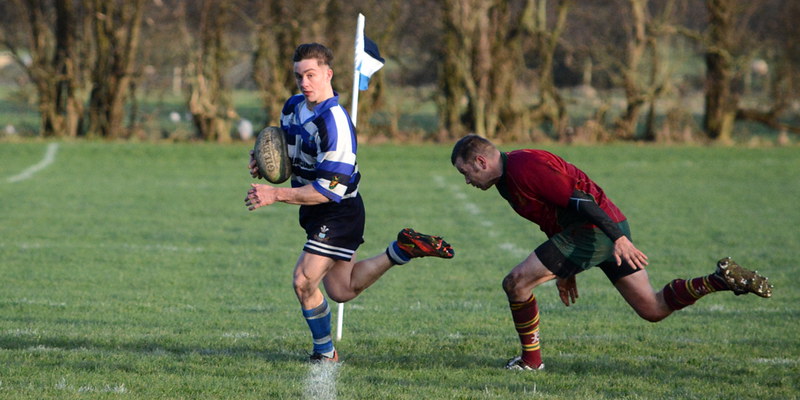 With the 1st XV being called off for the third time this season due to a waterlogged pitch at Stocksbridge the focus was on the 2nd XV Merit League match against Heath. Although the home side made a promising start, the visitors claimed the first try through their forwards, but after the home side settled, it was mainly ‘Ensians who called the shots after that, scoring five good tries to come out with a comfortable victory.

The fierce cross-wind made for tricky handling, but despite a lively start by the hosts, it was Heath who took play into the opposition 22 and drove over through the forwards for a 5 – 0 lead on 10 minutes. The home side responded with some enterprising play with half backs Sean Leddy and Johnny Ratahi getting their back line moving and on 15 minutes the ball was spread wide for centre Paddy Phipps to score a fine try half way out. The strong wind made conversions a lottery and the scores were level at 5 – 5.

Heath came back into the game through some good turnovers from their experienced forwards and, through falling foul of the referee, the hosts were regularly driven back by a series of penalties which cost them dearly for the rest of the match. This and some good defence kept Heath very much in the game for the next twenty minutes. The home scrum had the edge through the front row of Tom Twist, Mark Wilyman and Peter Bonner with flanker Sam Featherstone doing well in the loose on making his first appearance after a four-month lay-off due to injury.

Meanwhile, ‘Ensians had been creating space and opportunities and when the ball was whipped wide, speedy winger Will Howarth rounded his man with ease and scored near the posts to stretch the lead to 12 – 5 on 32 minutes, Sean Leddy adding the conversion. The home side were now moving the ball well with some slick interplay between forwards and backs. The Heath defence was stretched and prop Tony Myers crashed over in the corner to move the half time score to 17 – 5.

At the break there were several changes with Ross Nichols and Dan Ridgway coming on in the pack and brother Sam Ridgway taking over in the centre. Heath made a solid start and sound tackling kept the lively home backs at bay. For both sides the gusting gale made life difficult and several moves came to nought through spilled ball and wayward passes. The home backs always looked the more dangerous and when they got over the gain line their back row of Duncan Setterington, Sam Featherstone and Ben Smith were on hand to provide support. Through incurring regular penalties, progress by the hosts stuttered with the visitors pushing play back with swirling kicks. After quick handling, Sean Leddy took his chance and nipped through for a try wide out. The conversion failed, but the home side’s advantage was now extended to 22 – 5 on 57 minutes.

To be fair, Heath did not roll over and continued to make life difficult for the home side with sound tackling and good turnovers and, with better handling, they could have had a couple of tries. Despite having the advantage in both territory and possession, the hosts met strong defence until the 79th minute when flanker Ben Smith set off on one of his trademark weaving runs to pop the ball up to full back Alex Longstaff who showed his pace to run in an excellent try. Again the conversion failed leaving the final score at 27 – 5 to the hosts.

This was an entertaining and good-spirited encounter with credit going to both sides for trying to play rugby in very difficult conditions. In the end pace, good support play and superior fitness saw ‘Ensians through.