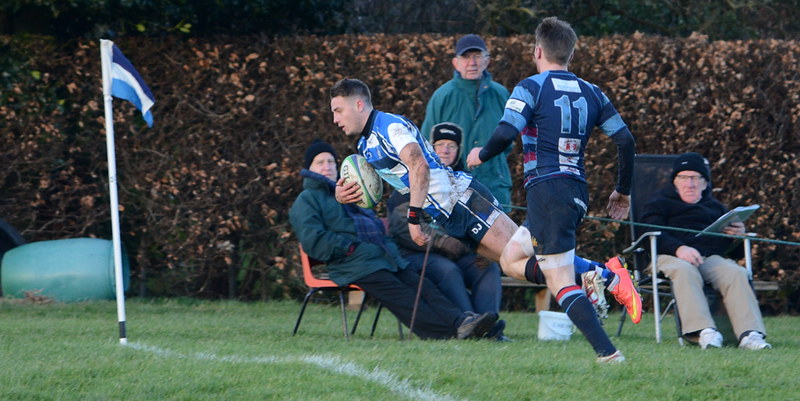 Ultimately Rotherham ran out of steam and the ‘Ensians ran out comfortable winners. The game was a scrappy affair, ‘Ensians were on the wrong side of the referee and a succession of penalties kept the visitors in the game. Flashes of brilliance from the home side’s winger Declan Jackson lit up the afternoon, Rob Arbuckle was his usual abrasive self, taking the game to the opposition and breaking the gain line.

Rotherham went into the lead very early and ‘Ensians equalled on 20 minutes with a penalty from Jackson after he had taken the game into the visitors’ 22 with a superb run. The home side’s lineout was not functioning, mistakes by both sides made for a lack of continuity and a good movement by the home side came to nought when they were penalised for holding on, Suddenly, however, Declan beat his man on the outside and scored wide out. The conversion failed and a score-line of 8-3 to the Old Boys was the half time situation.

‘Ensians were without their captain Nathan Rogers at the restart; he had returned from a long injury lay-off and had to call it a day with 40 minutes under his belt. Penalty after penalty to Rotherham gave them the chance to kick two to take the score to 8-9 with quarter of an hour gone. Lee O’Donnell was sin-binned, Oli Cooper was subbed and the teams took it in turns to have possession and turn it over. Declan ran well when given the opening and then suddenly Oli Eaves kicked from stand-off to the right wing; it initially looked innocuous, but Arbuckle (what was he doing there?!) took the ball brilliantly on the full and charged in his inimitable way to score in the corner. Jackson converted with a fine kick and out of nowhere we had seen play of wonderful skill. 15-9 with 10 minutes left. Handling mistakes, scrums, penalties, line-outs, in frenetic succession made the game difficult to follow, but eventually superior fitness began to tell and Oli Campbell went over for a try. The drop kick conversion attempt failed. Sustained pressure by the home side against a tiring Rotherham led to a clean break in mid field and centre Luke Freer streaked over under the posts. The two points were added and after an afternoon of hard work, frustration and struggle, the final result gave Old Otliensians the win and the bonus point.