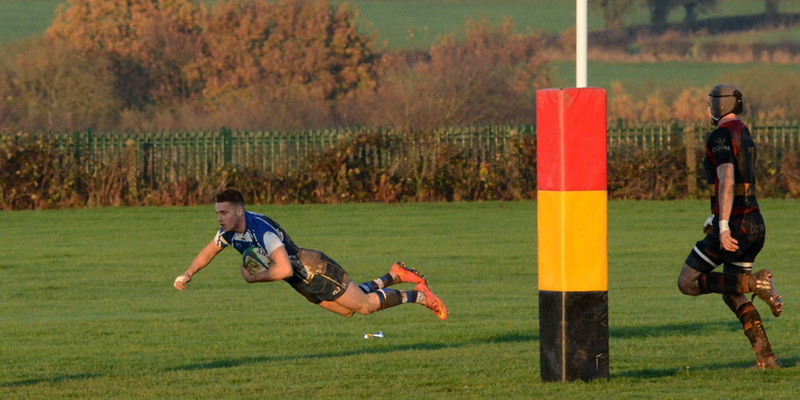 With no pitch available at Claro Road, the match was transferred to a nearby school where the pitch was seriously boggy. Fortunately, the visitors managed to adapt to the conditions better than their hosts and they contained the opposition up the slope in the first half to establish a narrow 3 – 0 lead at the break. Despite injuries, ‘Ensians managed to create a chance for flying winger Declan Jackson to score under the posts and the conversion gave them a 10 point advantage which they defended until the final whistle.

The visitors made a lively start up the slope taking on the heavier home pack with some good pick and drives and then moving the ball wide through half backs Rob Lofthouse and Ollie Eaves. The home side struggled to cope with this enterprising play and on 5 minutes they conceded a penalty which full back Kristian Keinhorst converted for a 3-0 lead. The visitors’ front row of Greg Jones Jim Dyson and Josh Dyson held their own against much heavier opponents and they continued to dominate when the injured Jones was replaced by Tom Twist after 15 minutes.

Considering the conditions, the ‘Ensians back line did well with good hands from centres Luke Freer and Zak Stead. Connor Bateman came on to replace injured winger Will Prest, but the visitors continued to pressure the hosts in attack, harassing them in defence and regularly turning ball over. In a rare venture into the ‘Ensians’ half, Pythons missed a penalty and then winger Jackson came close when Keinhorst kicked through to the corner. Harrogate managed to get their backs moving occasionally, but strong tackling from the visitors’ back row of Ollie Cooper, Greg Manning and Toby Barltrop brought things to a halt. In the lineouts, lock Ali Campbell, flanker Ollie Cooper and No.8 Greg Manniing produced quality ball to get their backs moving over the gain line.

After the break, Pythons lifted their game and used their pack to settle in the visitors 22 where they battered away at the line for ten minutes. The ‘Ensians defence was superb with big forwards being flattened with hard, low tackles. A penalty against the home side allowed play to move downfield where a slick pass to winger Declan Jackson allowed him to fly down the narrow side and outpace the cover to score a trademark try under the posts. The conversion by Keinhorst gave the visitors a 10 – 0 lead on 55 minutes.

The home side then roused themselves and again put pressure on through their big pack to push ’Ensians back into their 22. With seemingly an ear to the noisy Harrogate spectators, the referee awarded a series of penalties against the visitors and when Pythons confidently opted for scrums near the line, the lighter ‘Ensians pack made life difficult for them. If the ball did move to their backs, the visiting back row and centres Zak Stead and Luke Freer swarmed all over them, turning ball over and clearing the line. A threatening kick and chase from Jackson was ruled in touch by the referee despite the touch judge not raising his flag.

In boggy conditions play became scrappy, but the visitors generally had the best of the exchanges and played in the faces of their opponents, frequently disrupting moves and knocking them off their stride. The nearest the hosts came to scoring was when their heavier pack put some drives together, but the visitors’ defence was impeccable.

This was a good away win by ‘Ensians in difficult conditions where they showed tremendous spirit and good teamwork to come out on top. They face a stiffer test next week at home to Castleford.