The rain had stopped, the ground at Thorne looked tremendous and the afternoon promised much. From a scrum in ‘Ensians 22, rob Arbuckle at no 8, fed scrum half Ieuan Cranswick, who made good distance and handed on to winger Declan Jackson. The attack was halted, but Ieuan was injured when tackled. He carried on and play moved to Thorne’s territory. However, the home side ran from deep and slick passing saw their winger clear but for his knock-on.

An ‘Ensian shot at goal from a penalty fell short and Thorne ran it again with their full back making good ground. ‘Ensians regained possession and had a pleasing move of inter-passing and pacy running, giving second row Connor Bateman a gap to make a brilliant solo break. At this stage, both sides looked dangerous with ball in hand, but the visitors were falling off tackles and after a quarter of an hour Thorne scored their first try.

Ieuan Cranswick had to leave the field with a shoulder injury, Dom Oddy went to scrum half and Nathan rogers fell back to centre. Thorne continued to attack, but turned over possession and Declan Jackson went close on the right wing. ‘Ensians’ ball began to dry up, they had to defend desperately and it needed a left-foot clearance kick from rogers to relieve pressure. Thorne, however, soon went over for a second try from their number 8. Playing with increasing confidence, Thornensians added a third try with only 25 minutes gone.

Poor tackling was giving Thorne far too much room on the ball and ‘Ensians began to chase shadows, conceding a bonus-point try on half hour. Thornensians’ confidence was growing in direct proportion to ‘Ensians’ struggle. Oliver eaves was sin-binned for a tackle offence, scrum after scrum had to be reset, and the game became very scrappy. ‘Ensians enjoyed some field position after successive touch-finding penalty kicks and pinned the home side in their own half. No points resulted though and half time came with the score-line at 20 points to nil.

The visitors had much to consider at the interval, but a rapid turn-round scarcely gave the teams breathing space let alone tactical time. From the kick-off, ‘Ensians put themselves under pressure by failing to secure the ball and the resulting scrum provided Thorne with the opportunity to register their 5TH try. Another (easy) conversion was missed and the scoreboard was at least increasing in fives rather than sevens! A great run by Thornensians’ winger ended in turnover ball and a subsequent penalty for the visitors. Nathan rogers had a good run, but the ‘Ensians threes were not seeing enough ball to be able to mount their customary fast attacks. Thorne were really able to play the faster, stronger, more committed rugby and gave the scoreboard official more work after 10 second-half minutes. The conversion attempt again failed.

Thornensians were certainly incurring the referee’s displeasure and penalty after penalty allowed ‘Ensians to slow the game down and give Themselve at least some chance of having the ball. Certainly the visitors showed real resolution at this point and late afternoon sunshine made things look a little brighter. It was all too much, though, to ask ‘Ensians to keep out a rampant Thornensians team and a 6TH try was conceded. Shortly afterwards, Thorne mounted a breathtaking move and several miss-passes allowed their number 12 a clear run-in to make the score 35 points to nil. Again, there was no conversion. The next few minutes saw both teams running strongly, making turnovers and giving away penalties, but there was no further scoring.

‘Ensians lost Nathan rogers with an injury and the afternoon was just not going their way. Connor Bateman, ‘Ensians lock, suffered what was potentially a serious back injury and after a long delay, the referee abandoned the match at the 77 minute mark. Happily, Connor was eventually able to get to his feet and walk to the changing room. Thorne had made the most of their chance to play seriously- good attacking rugby. With the return of some regulars, ‘Ensians will have better days. 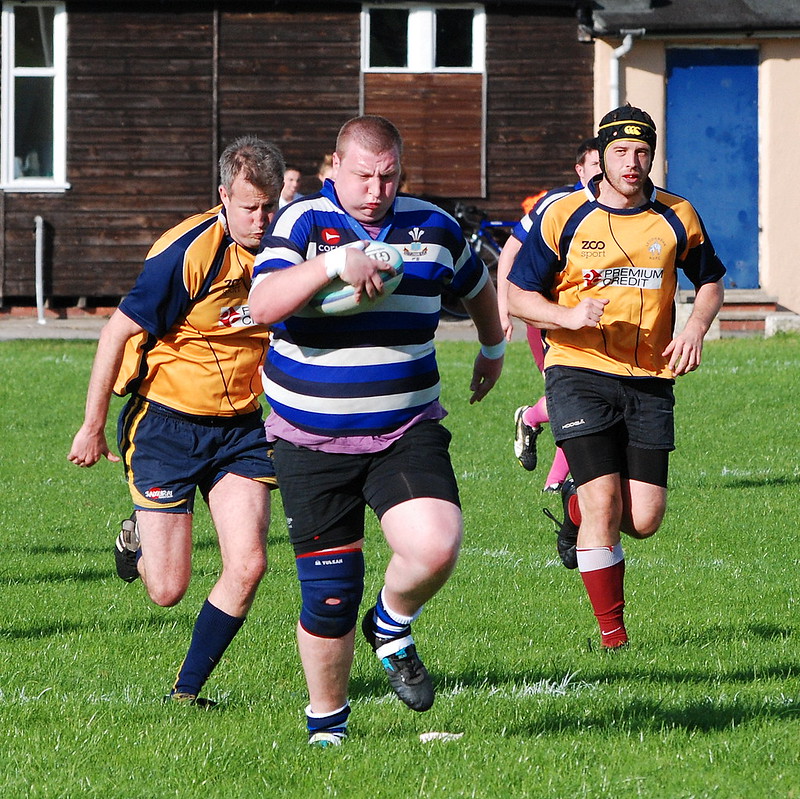 It was on a fine sunny day at Chaffers Field when the Ensians 2nd XV took on Leos 3rds. The conditions were perfect for running rugby. Unfortunately Ensians could only field 11 players due to call ups to the 1st XV and Leos came with 14 and being good sports lent the home side a player to even it out to 12 vs. 13. Neither side could raise a full front row so the game was played with uncontested scrums.

The game started with good play from the visitors using there big forwards to move the ball up into the Ensians 22. Good home defence from the Old Badger Rich Crossley and the ultimate utility player, the Balding Flash, Ben Smith moved into the back row for the day. Leos experienced half backs shifted the ball wide and some missed tackles allowed there winger to score. The conversion was successful and the visitors were up 7-0 after 5 minutes.

From the restart the visitors knocked on. Off the back of the resulting scrum, young scrum half Alex Burnett got the backs moving. Former club player Sean Kennedy, back for the weekend was at fly half, made a jinking run, put the Balding Flash through a gap who uncharacteristically passed back inside for the Leos loan player to score against his own side. The conversion missed bringing the score to 5-7 after 7 minutes.

After the restart some fierce defence from the Man Mountains of Eddy Waterhouse and Pete Bonner led to the Old Badger getting a turnover. The home backs with the Marauding Marine, Matt Taylor and former 1st XV player Todd Hammond in his first game back for a while were looking dangerous. The last pass just not going to hand letting Leos off the hook. However Todd’s vision soon showed intercepting a stray pass and offloading to Taylor to score bringing the score to 10-7.

The home backs were looking dangerous with great lines from Kennedy and Hammond opening up gaps, with strong running from Taylor but handling errors were meaning Leos were getting back possession. Strong home defence was making life difficult for the visitors with good tackling from Hooker Ben Tetley and number 8 part time trumpet tickler, Dan Ridgeway, the less talented and worse looking of the Ridgeway brothers and good rucking from the Old Badger and the Balding Flash. However Leos were offloading out of the tackle well and moved the ball into the Ensians 22. Despite a great last ditch tackle from Just for Men model Sean Flesher, Leos used the extra man to score. Leos missed the conversion to bring the score to 10-12 on 25 minutes.

The home side were spurred into action and upped the pace of the game. The Leos player James was tackling hard against his friends and forced a turnover. Good running from the Balding Flash gained Ensians good ground. Unfortunately an offload out of the tackle gave the ball to the pacey Leos backs to run in unopposed to score against the run of play giving the visitors a 10-17 lead.

Again Ensians worked hard to regain the ball. Strong drives from Big Eddy, Bonner and Ridgeway with quick pick and goes from the Badger and the Flash moved the ball well into the visitors half. Alex Burnett was giving Kennedy good ball from the base allowing him to use the Marauding Marine to drive the ball into the Leos 22. The visitors infringed. Some quick thinking from the Flash taking a quick tap, caught Leos unaware and he scored under the posts. Kennedy converted and the scores were level at 17-17 on 33 minutes.

At the restart, Big Eddy caught the ball. With some deceptive pace he set off on a Rhino charge of a run from 60 meters out, however after 30 meters he ran out of steam and tripped over the full back. The full back was fortunately unharmed from his bravery. This opened up the visitors defence, however the home sides handling let Leos off the hook again. From the resulting scrum the visitors used the space and their extra man well to score again giving them a narrow 5 point lead. 17-22. The first half ended with the visitors in the lead but despite being a man down the home side well in contention.

Ensians started the second half brightly with the forwards creating a good platform and backs looking dangerous, cutting into the visitors’ territory, again unable to finish off, and trying to force passes handing possession back to Leos. Using their off-loading game well and with the extra man scoring twice in quick succession taking the scores to 17-32 on 55 minutes.

The home side didn’t let their heads go down and worked hard in defence to get the ball back. Burnett picked the ball, drew the defence and put Kennedy through a gap to work the ball into the 22. Good forward support moved the ball closer to the visitors try line, possession was scrappy and Leos turned the ball over but the clearance kick gave the home side a line 10 meters out. The Flash leaped like a salmon reminiscent of second team legend Steve Wade to claim the ball and set up a driving maul. Ensians drove over with Ridgeway scoring. Kennedy converted bringing the score to 24-32 on 60 minutes.

Despite boasts in the pub of a Friday evening, Hammonds fitness was not quite as good as he thought and the amount of alcohol consumed by Kennedy and Taylor the night before and Just for Men model Flesher stepping in at the last minute after a 60 mile bike ride and the opposition having the extra man, all the defending was taking its toll on the Ensians back line and Leos were able to work an overlap off the base of a scrum to score again. Taking the score to 24-39 with the successful conversion on 65 minutes.

The home side were not for giving up, and the Old Badger captaining the side roused his troops before the restart. Ensians worked hard in defence again to force a turnover. Again Burnett could give Kennedy good ball to put Taylor, running hard into gaps. Despite blowing out of his bum hole, Hammond was still showing flashes of brilliance with some great footwork and slick offloads to Flesher. Being a man down it was hard for Ensians to break down the visitors defence and they managed to keep the home side from scoring.

Play went back and forth, with both sides putting in some great defensive performances to prevent the other from scoring. Ensians came close to scoring a couple of times with great plays from the backs and strong drives from the forwards but the last pass was not going to hand and Leos were able to clear and relieve the pressure. However defending a man down meant it was more difficult for the home side and took more of a toll on the fitness Ensians players. The visitors picked off the back of a scrum and used the overlap to round the defence and score out wide taking the score to 24-44 on 75 minutes.

This was how the game finished at full time. Despite the uncontested scrums and neither side having a full complement, this was a great game of open running rugby played by both sides in a great spirit. The score line flattered the visitors slightly but with even numbers the score line could have been a lot closer, however Leos were the fitter side and all credit to them for evening out the numbers.