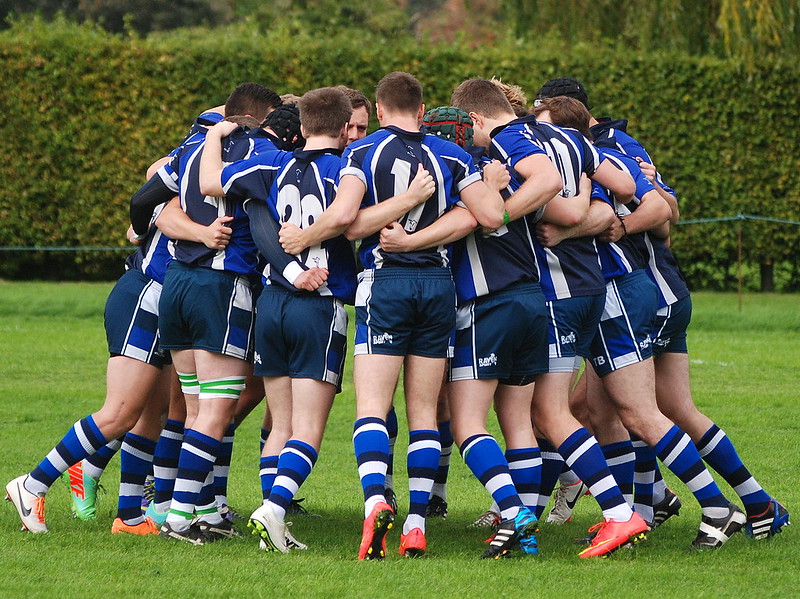 ‘Ensians faced fellow promotees and chief rivals for the league championship last season on a bright and breezy day. In an excellent first half playing into the wind, the home side rattled up five fine tries and followed these up with three more to round of a comprehensive display of fast open rugby.

Although again facing a bigger pack, the hosts soon had the ball moving wide through half backs Rob Lofthouse and Ollie Eaves and centres Dom Oddy and Luke Cowdell were immediately causing problems for their opponents. Cowdell found some space in midfield and jinked his way through near the posts on 4 minutes and then followed it up two minutes later with another scorching run to outpace the cover to score again. Unfortunately both the straightforward conversions were fluffed to leave the score at 10 – 0 on six minutes.

The visitors then roused themselves and through good drives by their pack and a couple of penalties, found themselves in the home 22. Once more it was backs-to-the-wall defence for ‘Ensians as they struggled to keep out the heavier opposition. They did well for five minutes with the back row of Ollie Cooper, Rob Arbuckle and centre-turned-flanker Nathan Rogers putting in some solid tackles. Eventually the pressure told and Stocksbridge drove over to get on the scoreboard. The conversion, failed taking the score to 10 – 5 to the hosts on 13 minutes.

Despite being outweighed, the home front row of Greg Jones and Dyson brothers James and Josh more than held their own and James managed to hook four balls against the head. Lock Ali Campbell and flanker Rogers competed well in the lineouts and the result was a steady supply of ball to their backs. This caused major problems for the visitors and their spectators visibly shuddered when the ball got anywhere near centre Cowdell and his winger Declan Jackson.

Cowdell completed his hat trick on 17 minutes when his blistering pace saw him carve through a bewildered defence and he added the extras to move the score to 17 – 5. He then put winger Jackson away to score halfway out and followed this up with his fourth try to take the score to 27 – 5 at half time.

After the break, Kristian Keinhorst came on at full back with the reliable Zac Stead moving to the wing and Ieuan Cranswick taking over at scrum half. The half time talk by their coach seemed to rally the visitors as they began to use their pack more to put in some good drives to gain territory. Replacement prop Tom Twist and hooker Rob Lyon quickly settled in and the home scrum continued to function well. The line speed of the Stocksbridge backs contained the attacking potential of their opponents for a while and the visitors managed to exert some pressure on the hosts without really threatening their line.

However, on 61 minutes centre Cowdell once more found a gap to burst through for his fifth with defenders grasping at thin air as he scored near the posts. Keinhorst converted to stretch the lead to 34 – 5. Stocksbridge never gave up, but they simply could not cope with the pace and slick handling of the home back division. The home backs rounded off a fine afternoon with two more tries from Declan Jackson to complete his hat trick. Two conversions from Keinhorst, took the final score to 48 – 5.

This was an excellent victory by the hosts with both backs and forwards working well together to produce some exciting rugby. With both Grovians and Thornensians losing, ‘Ensians now have equal points and share top spot in Yorkshire 3 with Grovians who have the edge with points difference. They will face a tougher test next week on the away trip to Thornensians who are currently lying two places below them in the League.