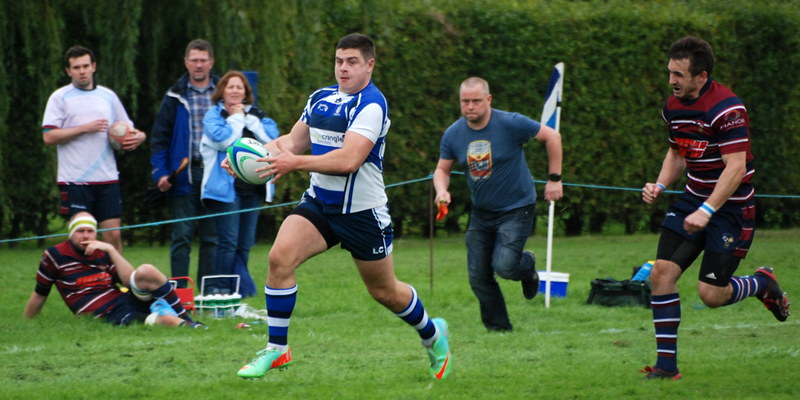 OTLIENSIANS made it two wins from two starts as they defeated their local rivals at Chaffers Field.
Aireborough, keen to avenge last season’s Aire-Wharfe Cup defeat by the old boys, made the early running.
They put Otliensians under a lot of pressure in the scrum where the front row of Tom Twist, Rob Lyon and Josh Dyson struggled as the visitors pushed them back at a great rate of knots.
Great tackling form centres Dom Oddy and Luke Cowdell as well as wingers, Ieuan Cranswick and Nathan Rogers, prevented Aireborough from turning pressure into points.
The home back row of Greg Manning, Sam Featherstone and Lee O’Donnell were having to defend hard against strong forward charges.
After nearly 20 minutes of solid defending in their own 22, Featherstone managed to force a turnover and the home side were able to clear down field and relieve the sustained pressure.
Otliensians showed that despite struggling in the scrums that the line-out would be a different story. Taking the visitors throw, the dangerous home back line got its first taste of the ball.
Some great interplay moved the ball into the visitors’ 22 with the ball being shipped wide to Cranswick who nearly got over in the corner.
Another line-out steal allowed the home pack to set up a driving maul and this time hooker Rob Lyon went over for a try.
Otliensians extended their lead when good support play by locks Ollie Cooper and Ali Campbell meant the home side had quick ball and were able to release Cranswick.
He made good ground before finding Manning in support who went over for the try. Cowdell added the conversion for a 12-0 lead.
The home side continued to apply pressure and put the visitors’ defence to the test but the score remained unchanged at the break.
Winger Rogers went close at the start of the second half before Cowdell rounded his man, chipped over the full back, collected his own kick and ran under the post to score a fine try which he also converted.
Otliensians had their tails up and scored again when No.8 Lee O’Donnell carried his side into the opposition 22.
He found scrum half Rob Lofthouse, who had been looking dangerous all game, picked the ball off the back of the ruck, chipped over the defence and collected his own kick to score a fantastic individual try.
Featherstone had to leave the field with a suspected dislocated shoulder so Rob Arbuckle came into a reshuffled back row.
If the home side thought the contest was over the visitors had other ideas.
Some strong drives from thei Aireborough forwards and good play in the back line saw them score a well-worked converted try.
The visitors stepped up the pressure and a pushover try, which was also converted, was a deserved reward, but Otliensians were not to be denied the victory they had to work so hard for.
Steve Robinson 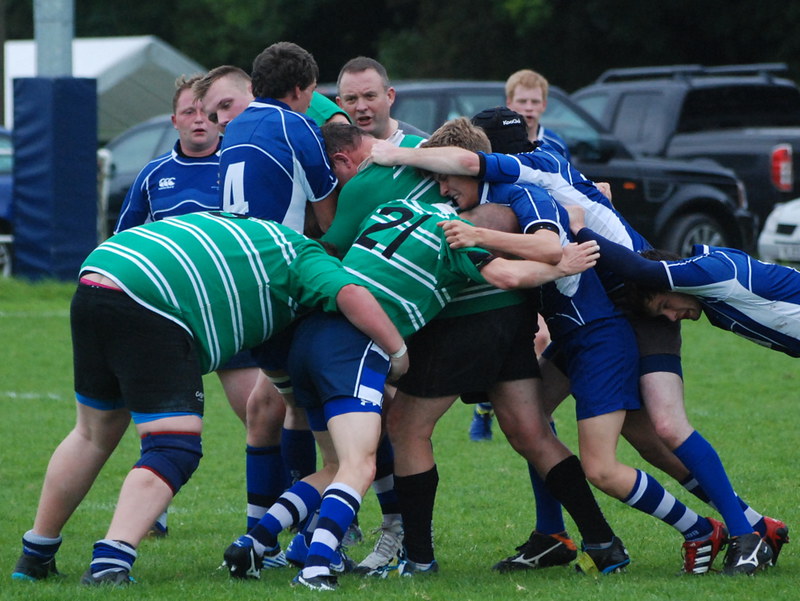 War Wounds and all, nothing stops this roving reporter.

With no game in the hand book, ensians went into the pool & came out with north rib 2nds who were happy to play away from home. North rib are a club who may look like the poor cousins to near neighbours Wharfedale, but for anyone whos had the pleasure to play at t”old rib ground, they used to play on a small, boggy pitch with a stand off who used to kick the ball up into the clouds. When it came down, if you were the unfortunate one to catch it [ and their wasn’t many takers ] you were trampled into the soft ground by a herd of charging farmers [ usually all related ! ] . The new rib, who had a mixture of older & younger players, are fit, tackle hard, run hard & don’t like to lose so it was always going to be a hard shift at the coal face. Ensians on the other hand, had lost quite a few players from the week before – dave smith, ben smith, tom twist, boothy, mike Wilson [ who just didn’t turn up ] joe robinson, brett tenniswood & daz cooley so things were always going to be tough against a team who you would struggle to beat at full strength. On the plus side, sam Tetley, ben newall & will pittendraigh were all available. There had to be a shuffle round to get a team, so the front row started with ben newall, mike wheelan & craig mawson. The 2nd row had big eddy & mature winger mark elam. The backrow had sam Tetley, his brother ben, & paddy moving to number 8. Rich crossley was at 9 again, with jonny rah at ten. Ross nicols who was playing his last game again, [ hes getting like the dfs closing down sale ] took up the centre position, with sean leddy at outside centre. The back 3 were will pittenbraigh, connor paley & at full back connor bateman. The game started with ensians attacking rib & things looked positive ! but once rib got their hands on the ball, they made the hard yards look too easy with some ensian players just falling off tackles, so it was no surprise when rib ran in 3 tries in 8 minutes. Ben newall left the pitch injured, so ensians went down to 14. This seemed to put some steel into ensians who worked their way up the field & from a tap penalty, big eddy drove into the rib players, sucking them in & crossley who was every where, forced his way over. Within 5 minutes they were back & with some great drives by wheely & craig mawson, & ross nicols boshing it up in the centres, a gap appeared for connor bateman to slip through & score. Unfortunatley rib came straight back & were picking holes & scoring far to easy. Ensians kept going & a couple of good runs by bateman came to nothing when he was tackled with the ball, when a pass would of being the better option with connor paley screaming for it. As the fitness of players took its toll in the 2nd half, so did the injury list with ben Tetley – leg , sam Tetley – various, from boot falling apart to knee & arm with 2 plates & 12 pins in buzzing ! [ only sam ! ]. rib lent ensians there spare player to help out but later in the 2nd half ross nicols who was named on the first team bench was called to duty for the firsts, so it was a game where the final whistle couldn’t come quick enough. There are some hard lessons learned by players in a game like this, the main one was poor tackling, one on one with players taking the easy option & getting shrugged off far too easy, but with the little experience of some of the players & positions they played it couldn’t be helped. Special mention goes to mark elam who was turned into a second row for the day, & even though looked lost, never stopped running & trying. Also big eddy who nearly completed 80 minutes, apart from getting sin binned for fighting [ someone tried to steal his packed lunch ] .