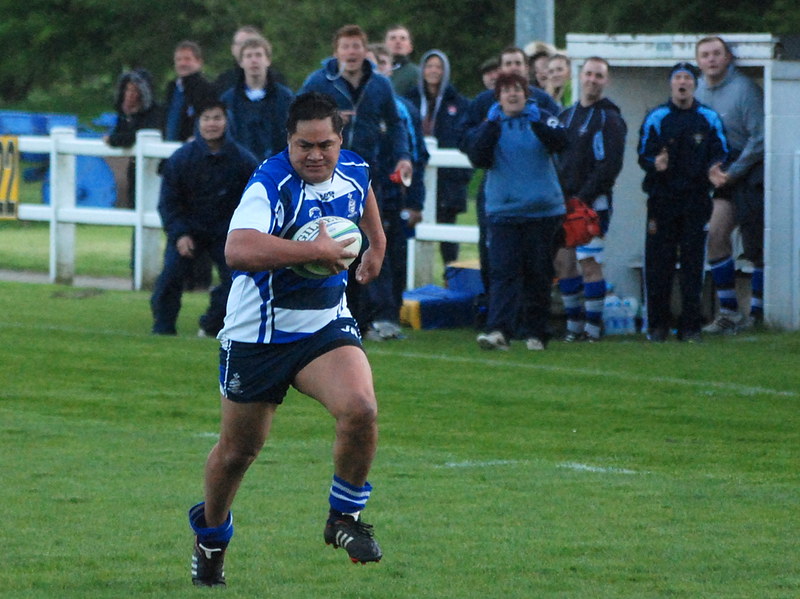 The final of the Aire/Wharfe Cup took place under floodlights at West Park on Wed. 7th conditions with a stiff crosswind.’Ensians played up the slope in the first half. After an early ‘Ensians attack they had scare when following a dropped pass by the visitors there was a frantic chase for the line just won by Nathan Rogers. West Park were taking control and their No.10 Jake Duxbury scored a penalty goal after 8 minutes After more Park pressure ‘Ensians broke out and, following a break by John Ratahi, Joe Hatton scored wide out well converted by Kristian Keinhorst to make the score 7—3 to the visitors .Straight from the kick off after 18 minutes Luke Cowdell shrugged off numerous tackles to run 60 metres and score a try again converted by Kristian Keinhorst. Although West Park kicked another penalty after 20 minutes ‘Ensians were in the ascendancy with some good breaks ,fine lineout play from Sam Featherstone and Steve Wade, and a ball against the head in the scrum. In 32 minutes a home kick ahead went straight to an ‘Ensian player who took it back up field ,opened it out and Declan Jackson made the break resulting in a second try for Luke Cowdell converted by Kristian Keinhorst to make the score 21-to-6 points in the visitors’ favour. West Park attacked again towards the end of the half but stout defence and in particular 2 great tackles by Lee O’Donnell limited them to one more penalty goal to make a half time score of 21-to- 9 points.

The second half started where the first half left off with a further West Park penalty and the score at 21-to -12 was becoming too close for comfort from ’Ensians point of view .They were leaking too many penalties and the home kicker was in fine form .However for the next 17 minutes the visitors were camped in the home 22 and came within an ace of scoring on numerous occasions but try as they could excellent defence from West Park kept them at bay.

The key point of the match took place after 21 minutes starting with a long kick out of defence by Park into the visitor’s 22.There followed a bizarre chain of errors from both sides resulting in a penalty try for the home team duly converted to make the score 21-19 to ‘Ensians. It really was “game on” Each team was now striving for the next score which would surely decide the winners.’Ensians were trying to open up their speedy backs but the Home team had lifted itself and gained extra strength in defence .On the other hand West Park were hoping for the penalty which would give them victory .One was missed after 35 minutes but after 38 minutes man of the match Jake Duxbury kicked the vital penalty to bring his personal tally to 17 points and the all important score to West Park 22pts ‘Ensians 21 points for them to lift the trophy.

As the cliché goes “It was a game of two halves”. The match could and probably was debated long into the night but West Park deserved their narrow victory on account of their fine defence, their belief in themselves and a goal kicker in the top of his form.’Ensians can take great credit in the way they fought so hard and so nearly succeeded and can be well pleased with their achievements in the past season gaining promotion to Yorkshire 3 as Champions.

It was a great typically well battled final with credit to both sides in the spirit in which it was played and enjoyed by all spectators but not a match for anyone of a weak disposition.

Grateful thanks are due to John Riley of Yarnbury for his excellent organisation of the Competition.

West Park Match Report "The Fight in the Dog" here