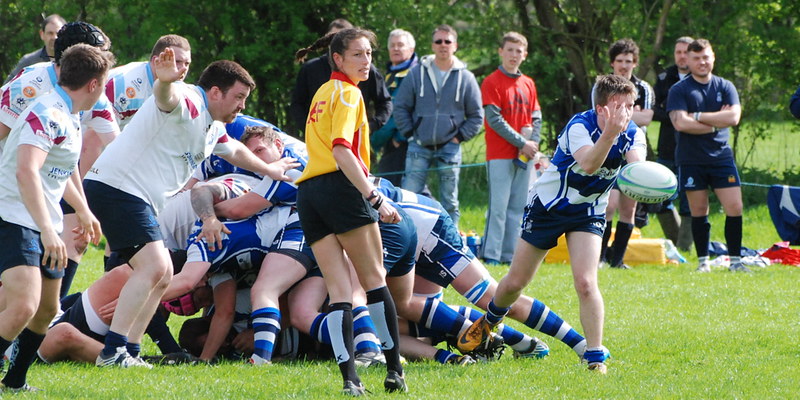 On a most pleasant afternoon 'Ensians entertained Rotherham Ph. in the quarter final of the Yorkshire Silver Trophy Competition. The visitors play in League Yorkshire 3 and 'Ensians will be playing them next season following their promotion from League 4.A challenging contest was anticipated from a good crowd. Also a first for the 'Ensians was that a lady referee would be controlling the match and she acquitted herself well ensuring an interesting and entertaining game for players and spectators alike.

Playing against a light breeze in the first half 'Ensians attacked from the kick off quickly achieving a turn over and opening out play. After seven minutes the ball was passed to Luke Cowdell who beat three opposition players to score an unconverted try to open the scoring. Rob Lofthouse and Kristian Keinhorst were combining well at half back and Luke Freer was making good headway. 'Ensians continued to play their fast open rugby which Rotherham Ph found hard to contain despite their bigger forwards. In particular the home front row of Tony Myers, Jim Dyson and Greg Jones were controlling the visitors in the scrums. After a move starting in the home 22 Winger Declan Jackson nearly scored and after winning a scrum against the head 'Ensians finished up just short of the line. It was all 'Ensians and after 16 minutes the ball was opened out from a scrum and Ben Hatton scored an unconverted try to make the score 10-nil to 'Ensians

For the rest of the first half much of the play took place between the two 22 metre lines but 'Ensians seemed to have the upper hand and Rotherham did not look like scoring. Lee O'Donnell was outstanding with his tackling and hard work in the mauls and rucks and Jack Smith was to the fore. Half time came with the score 10 points to nil in favour of 'Ensians.

Rotherham had a change of plan after the half time break. They realised that the only chance they had of winning the game was to keep the ball away from the home backs and use their heavier forwards to make ground. This tactic earned dividends and despite good 'Ensian defence with Sam Featherstone outstanding Rotherham battered the Home try line to score an unconverted try after 8 minutes and another converted try two minutes later to take the lead 10 points to 12 points. The visitors continued to pressurise the home defence with their forwards on top for the next 10 minutes but were unable to get over the line.

The tipping point came after 23 minutes. The visitors tired and the 'Ensians superior fitness came to the fore. Fitness has been a major key to 'Ensians success this season due to the efforts of Coach John Walker and fitness trainer Pat Cowdell and it told again. 'Ensians broke out of defence into the visitors half for the first time since the early minutes of the half and in the following 5 minutes the ball sped across the backs only for Callum Doherty to be tackled into touch, Ben Hatton was just wide with a 40 metre drop goal and Steve Wade made a telling break. A score was inevitable and a brilliant try ensued. Sam Featherstone took a good lineout ball Captain Rob Arbuckle took the ball forward and Kristian Keinhorst made the initial break to pass the ball to Luke Cowdell who scored a superb unconverted try giving 'Ensians a 15 points to 12 points lead.

However better was to come after 34 minutes .A move again started by Rob Arbuckle saw the ball passed to Kristian Keinhorst who made an inch perfect cross kick to be taken at speed by Declan Jackson who raced over to score an unconverted try .It was all 'Ensians now and in a move started by prop Greg Jones the ball crossed along the line for Declan Jackson to score his 32nd [one short of the club record]converted by Ben Hatton to make a final score of 27 points to 12 points and put 'Ensians into the semi final. To their credit Rotherham did not give up and spent much of the last 5 minutes battering the home try line but the defence held firm. 'Ensians had won an exciting and attractive and entertaining game but will have a tougher task in the semi final against old adversaries Castleford